When I traveled in Sweden, I saw plenty of runestones dating from the Viking age. Ireland had its own script, called Ogham, during the same period. It looks a bit like tally marks: each letter is a set of parallel lines connected by another line. Legend has it that each letter represented a different type of tree: birch, rowan, alder and so forth.

The letter shapes made the alphabet easy to inscribe on stone. The letters were chiseled in along the edge of a stone, starting from the lower left. Most ogham inscriptions seem to be marker stones of various types.

Ogham stone in Ardmore in County Waterford. It says “Of Dolativix, son of the smith Lugud, tribesman of Nia Segamain.”

The ogham inscriptions are of value for what they tell us about Irish personal names in ancient times (though almost all of the examples are male). Two of the most common name elements were CUNA (“hound” or “wolf”) and CATTU (“battle”). There were men named “Prince of hounds,” “Strong as a hound,” “Man of battle” and “Yew-tree of battle.” Thus it is not surprising to find a man in the sagas named “Hound of Culann” (Cúchulainn). 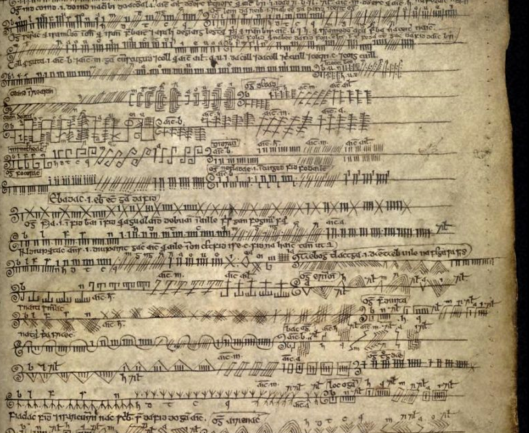 Part of a page from an Old Irish treatise (In Lebor Ogaim) detailing many varieties of ogham script.

The ogham script was also used on wood, as in this week’s chapter. There was even a special version called “the secret ogham of warriors.”

“Fergus, there is something wrong with the road we’re taking. I gave you the head of the army, but you are leading us too far south. I begin to think this is treachery.” Fergus was a fine large man with a well-turned leg and broad, heavy shoulders. He was probably good in bed, thought Medb appraisingly, but he was far from trustworthy.

“Queen, you misjudge me,” answered Fergus mildly. “I would prefer to avoid the mighty one who guards the plain of Muirthemne; that is all.”

When they reached Iraird Cuillenn, on the border of Ulster, they came to a standing stone by the road. Upon it sat a spancel of pliable willow withy, such as men used to hobble horses. Fergus retrieved the willow hoop from the rock. “This spancel is inscribed with ogham letters,” he said. “Let the druids examine it.”

Medb’s chief druid Mogruth took the spancel hoop and read aloud the baleful signs carved into it. “‘Come no further, unless you have among you a man who can make a hoop like this with one hand, from one unbroken withy, and cast it upon the stone from a hundred paces.’ It is a champion’s challenge, O Queen. The royal army must not proceed this way, by the rules of war, unless there is one such in the host who can duplicate this feat.”

“What are the rules of war to me?” replied Medb. She had little patience with druids and their mutterings. “Let us proceed.”

“Nay,” said Ailill. “We need not pass this way. Let us pass instead through the neck of the forest of Fid Dúin, to the south and toward the coast, and thus avoid the challenge. Otherwise a loss of life on our side is certain.”

All the men about her supported Ailill in this matter, so she grudgingly agreed, but said to her husband and Fergus, “Always you urge us southward, yet Cuailgne lies to the north. I begin to wonder whether the two of you possess one stone between you.”

They passed through the forest and approached the ford of Ath Gabla. Two teams of horses cantered toward them, drawing empty chariots which rattled as they came. “These are the horses of Err and Innel,” said Fergus. “They were sent ahead to learn something. It seems they met with a harsh teacher.” When they came to the stream, they saw that a huge forked tree had been thrown across it. Four branches rising from the tree held the four heads of Err, Innel and their charioteers Foich and Fochlam. Again, ogham letters had been cut into the tree.

‘Come no further, unless you have among you a man who can throw a tree like this with one hand. I make exception for Fergus,’ read the druid. There was consternation at his words. Finally Medb said, “Enough. We rest tonight, and tomorrow we go forth, after the tree is cleared from the ford. Fergus may perform that task.” They spent the evening around the fire, while the Ulster exiles told tales of Cúchulainn’s youthful exploits.

“He is only one man,” said Medb, but she thought: one man who is taking up far too much of our time.

The next day they entered the Pigkeeper’s Plain, and found an oak cut down in their path. It was inscribed, ‘Come no further unless one of you has leapt this oak in your chariot on the first try.’ Medb wanted to keep moving, but the warriors agreed with Ailill that this was a fine challenge. They would lose face if none could match the feat of the Hound. So they pitched their tents and set themselves to making runs at the oak log. Thirty chariots crashed, and thirty horses fell on the spot, before Fergus managed the feat. While they were thus occupied, Cúchulainn silently killed six of their watchmen.

“Woe to all of you fools,” said Medb. She sent her son Orlám with his charioteer to cut new chariot poles, so that the smashed chariots could be repaired with all speed. A few hours later, the charioteer returned with Orlám’s head strapped to his back. “My Queen,” he said, bowing low so that she could see the sorrowful burden he bore. “I was cutting poles in the woods when a dark man, not too large, met me. I thought he was one of ours, so I asked him to lend me a hand with the task. I gave him a choice whether to cut or trim, and he said, ‘I’ll trim.’ He slid a pole through his clenched fist, and in this way trimmed off all the bark and every knot as smooth as could be. I was afraid then, and asked his name. He said he was Cúchulainn. He killed Orlám, who was sitting in the chariot waiting for me to finish. Then he said I must come to you like this. He would be watching, and if I faltered or tried to remove the head from my back, he would brain me with a stone from his sling.”

“Enough,” said Medb in disgust. “Ailill, see what a great boon your games of honor have brought us.” She had been fond of Orlám, even though he was far from the strongest of her sons.

The next day, Medb was walking through the camp when a sling-stone hit the pet squirrel on her shoulder, nearly tearing the head from its body. As her guards whirled about in confusion, she bent to pick up the tiny corpse. His head for yours, Hound, she thought. Sooner or later, I’ll see your neck trimmed.

Notes: We are now well into the story of “The Cattle Raid of Cooley.” What fascinates me about the plot of the saga is the role gender plays in Medb’s attitudes to war versus that of the men. All the males, including the druids, are preoccupied with matters of honor and the “rules of war.” Such rules are characteristic of warrior cultures and would have been part of an Irishman’s training from his boyhood. But as a woman, Medb never received such training. She takes a more pragmatic, and much less romantic view of war. Because of his predicament as the lone defender of Ulster, Cúchulainn is forced to do the same, fighting guerilla-style. But his goal is always to bring the combat back to the traditional duel between champions.

The red squirrel, with his prominent ear tufts, is a species native to Ireland.