Last night I watched Taken in order to find out what all the fuss was about, since this hit film has spawned two sequels and a TV series. Turns out it’s a well-made action thriller produced and co-written by Luc Besson, of La Femme Nikita and The Fifth Element. The plot is simple: criminals foolishly meddle with LIAM NEESON’S DAUGHTER, and quickly discover their mistake. 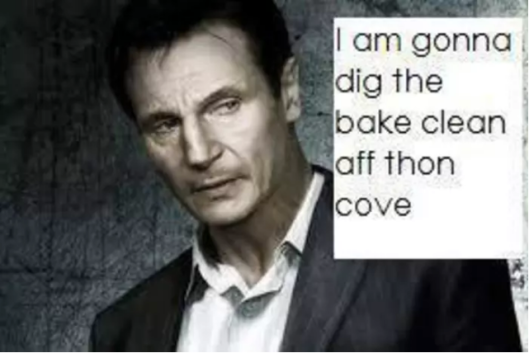 Movies like this are successful because they play so expertly on our cultural beliefs about masculinity. Granted, many males will gladly watch a two-hour car chase devoid of a plot (and this film does include a tediously long car chase). But to inspire a truly devoted following, an action film must retell an age-old story. Taken is the male version of the Cinderella tale, a fantasy fulfillment with thrilling mythic resonance.

“Once upon a time, a Decent but Very Dangerous Man had to get medieval on some Bad Men’s A**es…”

Now, personally, I would prefer to see Mister Neeson in a movie with romantic and comic elements. Anyone who saw Love Actually knows that he is delightful in such roles. And then there’s Clash of the Titans…

I take full responsibility for this meme…

In Taken, Neeson’s Bryan Mills is an ex-CIA officer “with a very particular set of skills” who quits his job to spend more time with his teenage daughter, having already lost his wife to a wealthy businessman. Mills is shown buying Kim a modest but thoughtful birthday gift, only to find that her stepfather has outgunned him with a lavish party and a purebred horse. His ex-wife (Famke Janssen) is icily superior towards him, and Mills goes home to forlornly paste the birthday photograph of his daughter into a scrapbook. But when Kimmy is kidnapped by sex traffickers in Paris, only her Daddy can save her. Because he’s a real BADASS. 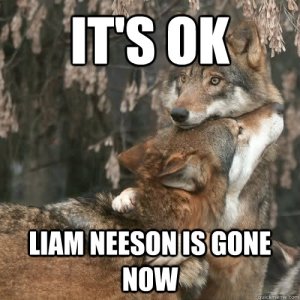 This meme is from another movie, where Liam Neeson punches a wolf in the face.

The film pushes every button in the male limbic system: Decent man loses his wife and daughter to a rival of higher social status. Man who has served his country honorably is under-valued, and his sacrifice not appreciated. Ex-wife scorns decent man and no longer desires him (ouch). Man is forced to listen to his daughter’s screams as she is kidnapped by thugs! Thugs turn out to be sex slavers who want to put his daughter in a sheik’s harem! Decent man’s response goes like this:

I don’t know who you are. I don’t know what you want. If you are looking for ransom, I can tell you I don’t have money. But what I do have are a very particular set of skills, skills I have acquired over a very long career. Skills that make me a nightmare for people like you. If you let my daughter go now, that’ll be the end of it. I will not look for you, I will not pursue you. But if you don’t, I will look for you, I will find you, and I will kill you.

To which the nasty kidnapper Marko replies with the fatal words: GOOD LUCK.

As a grumpy cat fan, this is one of my favorites.

I need to send this to several of my co-workers.

Unfortunately the film also pushes some racist buttons. The kidnappers are all swarthy “Albanians” and men with a Middle Eastern look. It would be interesting to reshoot this with nothing but blond and blue-eyed villains (and maybe a few carrot-top baddies thrown in for variety). The film tries to make up for its bias by showing how Mills’ old friend Jean-Claude, who now has a desk job in the French secret service, has himself become complicit in the sex-trafficking.

Interestingly, the film reaches beyond civilized notions of masculinity to the primitive idea that a man’s only obligation is to his own kin–and that he has the unquestioned right to rescue and/or avenge them. When Jean-Claude asks, “Had you thought of going to the police?” Mills explains that he only has 96 hours before Kim disappears for good into the sex-slave underworld. Ehhm, fair enough… Later, Mills actually shoots Jean-Claude’s innocent wife in order to make his point, then casually remarks, “It’s only a flesh wound.”

Liam at his scariest.

After Neeson remarked that the US needs stricter gun control laws and that “America has too many f***ing guns,” the meme generators got busy again, branding him a hypocrite for starring in the Taken films. Neeson noted, however, that he grew up watching cowboy movies with guns, and he didn’t end up a killer. [Ed.: Even if he is fatally charming.]

The critics have an interesting argument, but I think Neeson is right to insist on the difference between fantasy and reality. Most people recognize that Taken is as unrealistic and silly as Pretty Woman. Movies like Taken don’t teach men to solve their problems with a gun; what they do teach is that we should value traditional masculinity. Is this a bad thing? Well, Mills has a much more up-to-date idea of male parenting than his traditional predecessors, many of whom thought childcare was women’s work. I can imagine him scaring the bejesus out of his daughter’s boyfriend, but also making sure she has birth control. He is supportive of Kim’s ambition to be a singer. Thanks to Liam Neeson’s performance, he seems like a modern guy who wants his ex-wife and daughter to be safe, but not to limit their freedom. In its fantastical way, the movie is trying to reconcile that ancient male limbic system with the way we understand gender today.

One last, mildly gender-bending Taken meme, which I suspect was created by a female fan: 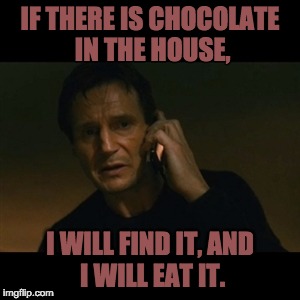