The “Shadow Woman” of my title refers to Scáthach, a mysterious warrior woman who trains Cúchulainn in the martial arts. She lives in Alba (Scotland), on what will later be known as the Isle of Skye. 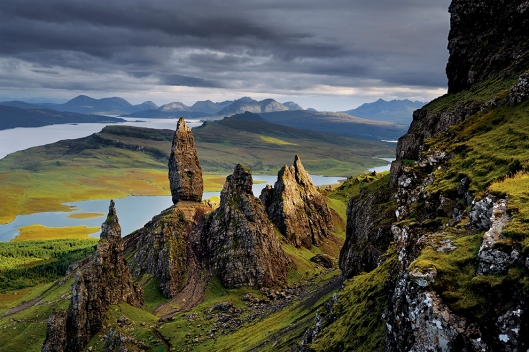 The eerie, dramatic landscape of Skye looks like the setting for a legend. Photo: National Geographic.

Scáthach strode into the great hall of her dún, still puffing a little from a training session with Lochmor and Fiamain, who were learning the apple feat. Uathach threw the apple high into the air, and each contestant was to cleave it with his spear, if he could. Scáthach sighed, displeased with the afternoon’s results. Lochmor had spent most of his time staring at the two apples barely contained within Uathach’s jerkin. Why did she have to remind her daughter to bind her breasts and cover them when working with young men? As for Fiamain, he’d cloven the apple several times. He would do. But Scáthach refused to pass him to the next level until he was successful every time.

“Some mead, my queen,” suggested her steward Clog, stepping forward and motioning to a cup and jug on the board. Clog’s every movement made a light jingling sound because his tunic and cap were sewn with tiny bells. Without the bells, he moved so silently that the students (and truth be told, Scáthach herself) were constantly surprised by his sudden appearances. Clog’s stealthiness of foot had resulted several times in his nearly being gutted by the hotheaded young warriors who came to train in her house. Once he was belled, the name “Clog” stuck. All this had happened years ago, but Clog was as soft-footed as ever. She suspected that he prowled the house at night, making his rounds without his belled tunic, in utter silence and freedom. Clog had Sídhe blood in his veins, as did she herself. It was a shame to spoil his gift.

“Thank you, Clog,” she said, gratefully downing the mead. Repeatedly demonstrating the apple feat, and the many other skills of a mistress of the martial arts, was not as easy as it used to be, now that she had reached her thirty-fifth year in the Land of Men. “Send my daughter to me.”

Soon a sullen Uathach stood before her. A few twigs in her hair told Scáthach that Lochmor had met with success. “Daughter, the flowering manhood of Alba and Éire does not travel here for the purpose of keeping you entertained. You ruined Lochmor’s performance today.”

“I’ll have no more of this. Spare them until they get past the sword-and-scían feat, or leave my house and fend for yourself. I’ll get you a husband, if you wish it.”

Uathach looked at her with a calculating expression. “Cochar Cruifne. I’d have him to husband me.”

You’ve had him plenty of times already, thought Scáthach. Cochar was one of her own warriors, the best of them, the only one she trusted to lead her personal cohorts. Still, perhaps it was time Uathach left to set up her own establishment. Cochar might keep her under control better than Scáthach could. The Sídhe blood affected different people differently. In Uathach, it created an insatiable lust, and bouts of frantic glee followed by deep melancholy. Fortunately or not, Uathach seemed to be barren. Perhaps only a Sídhe Lord could quicken her.

“And you must ask no bride price of Cochar,” demanded Uathach. I have only myself to blame, thought her mother. I was always too indulgent. Uathach had never known her father, even at nineteen a grim warrior too wild and savage to be trusted with a squalling brat. Scáthach had chosen to keep Conlan’s get, but he was long dead now.

They were interrupted by a loud, thudding noise in the anteroom to the great hall. Clog poked his head in after a moment. “My queen, a new student has arrived. He announces himself by thrusting his spear through the front doors of your dún.”

Scáthach nodded, as unsurprised by the newcomer’s advent as she was by his aggression. The path to her dún was no easy path. There was the Plain of Bad Luck, full of hidden pits and saw-bladed grasses. Then the Perilous Glen, inhabited by shadowy but ravening beasts whose teeth and claws were real, though the rest of them was insubstantial. Finally, would-be scholars of the martial arts had to cross the long bridge to her island. As soon as a man stepped upon it, the far side rose up, and unless his reflexes were quick, he was dumped into the salty whitecaps below. The only way he could reach the safe middle was to execute the hero’s salmon leap. Then at the other end, he faced the same challenge, and must leap again, or perish in the rushing water with the other weaklings.

Warriors often arrived at Scáthach’s school in a bad mood. But if they thought they could bully her, they had much to learn. “Receive him in the usual manner,” she said, a faint smile curving her lips. “The usual manner” involved a cooling bath for the heated scholar, administered from above. “I’ll be in the grove taking my rest.”

Notes: Many heroic “feats” are listed in the Irish sagas: the apple feat, the rope feat, the side-stroke, the edge-feat, and so on. Nobody knows exactly what these are, so I had plenty of scope to describe them. My favorite is “the hero’s salmon leap,” which must resemble a salmon jumping from the water when it climbs upstream. The “trick” bridge to Scáthach’s dun which requires the hero to make his prodigious leap is described in the original. 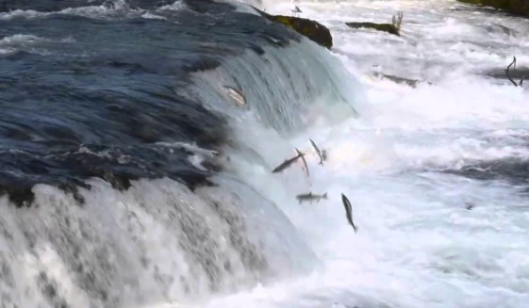 Salmon leaping a waterfall. They have been recorded jumping as high as 12 ft (3.65 meters).