Buffet-style restaurants are as polarizing as the US presidential election. Either you love the idea of being able to choose exactly what you want and have as much as you like of it, or you’re pretty sure that a buffet simply saves the proprietor a trip to the dump.

The last time I went to one of these “Heartburn Hotels,” the only vegetarian dishes (other than the salad bar) were breaded, deep fried mushrooms, fried cheese sticks, and fried potatoes.

On Evan Kleiman’s “Good Food” blog from KCRW in Santa Monica, I just read about the “new wave” in Las Vegas, the Buffet Epicenter of the United States. Vegas has become quite a foodie destination now, with überchef restaurants like L’Atelier de Joël Robuchon, Restaurant Guy Savoy in Caesar’s Palace, and many more. The buffet scene has accordingly been upgraded. 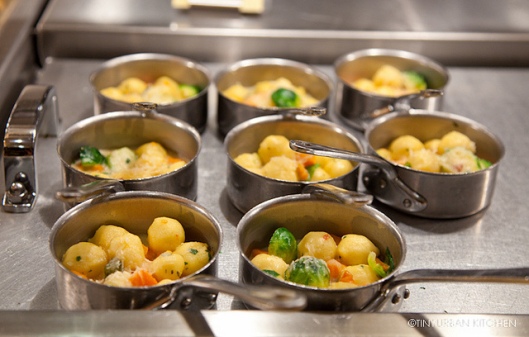 Asiago-stuffed gnocchi with spicy sweet potatoes and brussels sprouts, anyone? Photos from Yelp.

How about The Wicked Spoon, a “food hall” where you can get anything from sushi, to fish and chips, to cheese plates, to grilled corn on the cob, to buffet/brunch classics like crab legs and eggs benedict? With a gelato bar, macarons, and an infinite variety of pastries for dessert (plus the essential chocolate-covered strawberries)? All prepared à la minute, on the spot, by eighty chefs?

Someone on Yelp commented: ““Even for a vegetarian there was enough variety of food there to make you morbidly obese and keep you salivating.” Which brings me to the reason we never go to buffets. Well, reasons. The Long-Suffering Husband is one of those who finds the the buffet concept grotesque (he hates potlucks too). And let’s face it, the buffet is perfect for Vegas because it’s built on the hope that you can “beat the house” by loading up on the premium items… which are always the meats and seafood. Going to a buffet as a vegetarian is like playing the slots: a sucker’s game.

Cheese service at the Wicked Spoon. 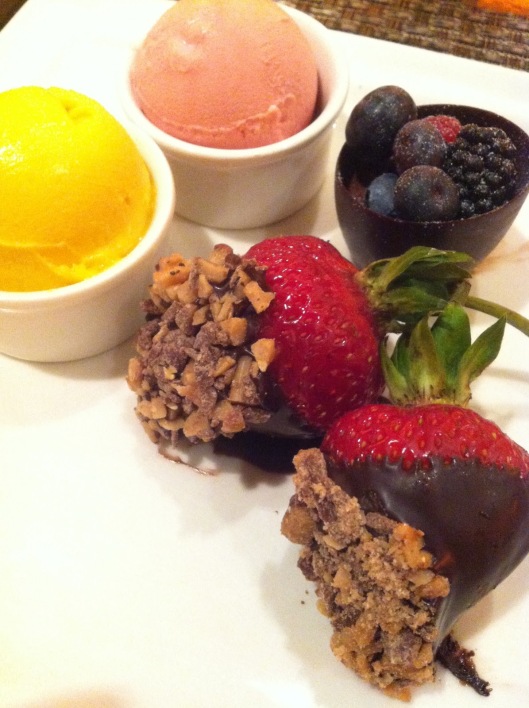 Still, I stubbornly believe that all the objections can be overcome. Not only do I adore hotel breakfast buffets (especially European-style ones with cheese) and fancy brunches with mimosas, I persist in imagining that, if only the selection was wide enough and the quality unusually high, I could devise a perfect meal around The Wicked Spoon’s truffle-infused potato gratin…

My taste was shaped early on, when my father would take us to brunch at the Biltmore Hotel in Santa Barbara. Photo: Thomas Dawson.

6 thoughts on “Buffet or Nay?”