Traveling to the west coast always makes me feel I have entered a Zone where people Exist Differently. San Francisco is a big city with plenty of traffic, but nobody honks the horn. The noise does not assault you the way it does in New York. 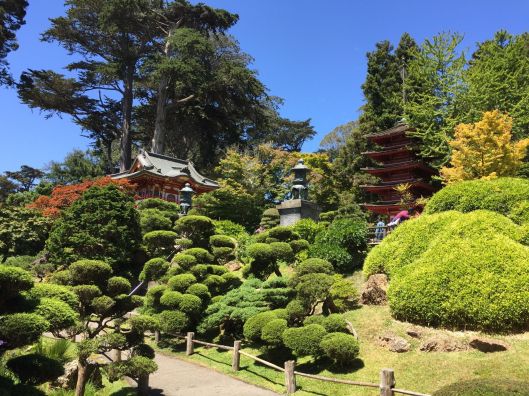 The quiet Japanese Tea Garden in Golden Gate Park is my favorite spot in the city.

Bay City people are mellow, and yet one feels remnants of a pioneer, wild-west attitude, the kind that reigns in more conservative places like Wyoming. They still love their steakhouses, and I was shocked at how difficult it is to find vegetarian-friendly restaurants around Union Square. The norm was one token meatless dish per restaurant.

The Golden Gate Bridge, with downtown San Francisco in the distance. The LSH took this photo after cycling across the bridge.

San Francisco was the epicenter of 1960s counterculture (and drug culture) in the US, and has become the unofficial capital of gay pride. Everywhere we went, there were rainbow flags honoring the victims of Orlando. The city also has a very large homeless population. 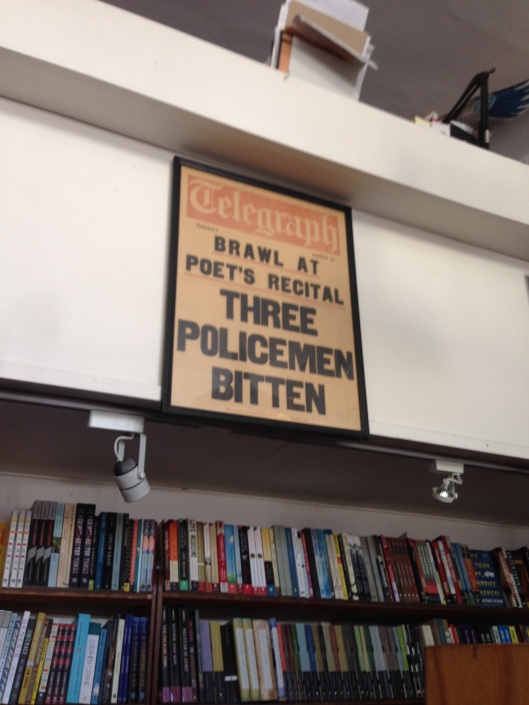 Sitting in our hotel restaurant, we watched a man order breakfast (with a Bloody Mary, oddly followed by a mimosa) and then try to skip out on the bill. When he was caught, he fought with the staff and screamed that he has lost everything he owned. Once ejected from the restaurant, he punched the curtained window glass right behind my head (yikes!) and lingered at the other door, gazing balefully into the space. If he’d had a gun, I suspect he would have used it.

On the other end of the economic scale is Telegraph Hill, a huge outcropping of rock crowned by an art deco masterpiece, Coit Tower. The tower was built in 1933 with money from Lillie Hitchcock Coit, a trouser-wearing, cigar smoking woman who is said to have passed as a man in the gambling dens of my birthplace, Long Beach. 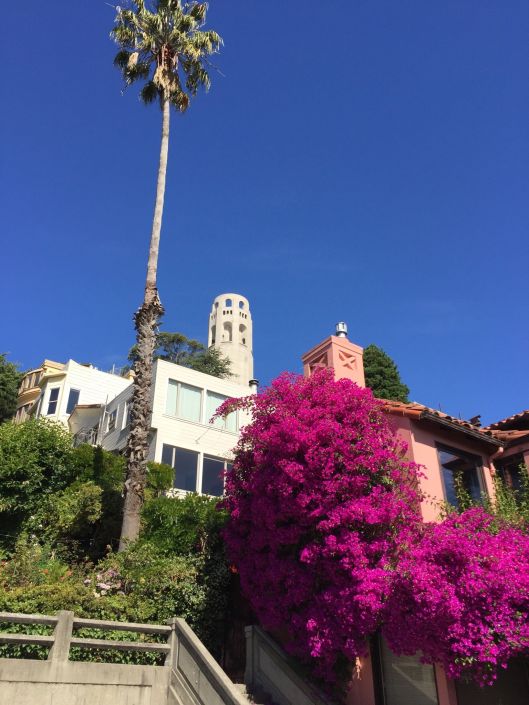 A quintessential California scene–bougainvillea, Spanish terra-cotta roof tiles, Coit Tower, and the palm trees that seem so exotic to Midwesterners. 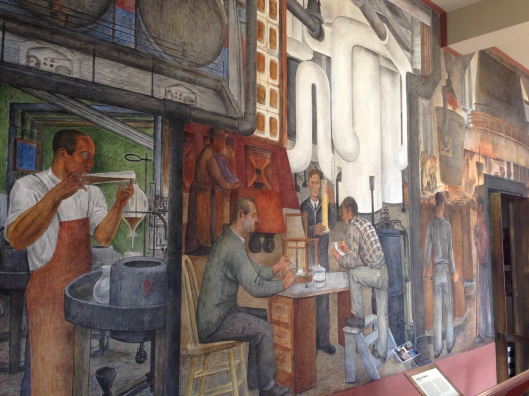 The interior of Coit Tower is covered with murals by 1930s artists in the style of “Socialist Realism,” much influenced by Diego Rivera. This one is “Industries of California,” painted by Ralph Stackpole.

The split between the famously rich “one percent” and everyone else is very apparent in this place of opulent homes on hills, and people sleeping in doorways. The natural beauty is so overwhelming that you wonder who would not want to live here. But I wouldn’t, because of the earthquakes. They had disastrously huge ones in 1906 and 1989.

The California Pioneers’ Museum in the Presidio preserves relics of pre-1906 San Francisco, when it was all about the Gold Rush. I love this sentimental painting by an unknown artist ca. 1850, titled “The Miner’s Dream.”

The Miner sleeps by his cabin, and in his dream he is reunited with his wife and child. Virtually nothing is known about this painting, which was a bequest from a family with pioneer ancestors.

Detail from “The Miner’s Dream.”

In spite of San Francisco’s urban environment, there are plenty of opportunities to connect with nature. Golden Gate Park, in particular, feels wilder and less manicured than Central Park. And it’s bigger. 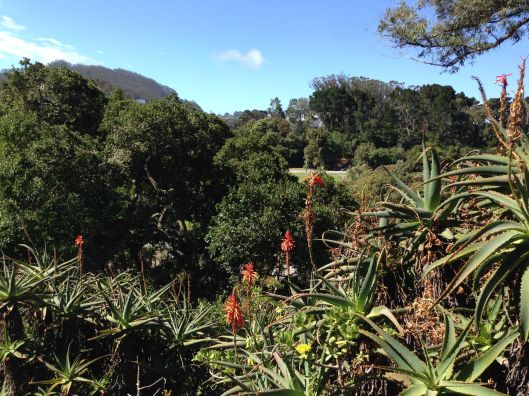 Cormorants nesting on the shores of Alcatraz, the famous prison island in the Bay. Many tried to escape from Alcatraz, but the few who got off the island probably drowned in the swift, cold currents.

Another of my favorite spots in the city is Pier 39, not for the touristy restaurants (none of which is vegetarian-friendly) but for the chance to view sea lions and seals basking on the K-Dock. They’ve been showing up there since 1989.

Not many were there on the day we visited, but check out this photo from Blue and Gold Fleet (click for source).

In spite of my complaints about meat-heavy menus, we ate well. The LSH enjoyed bowls of Vietnamese Pho while on his cycling trips, and I loved the delectable, soft fresh corn tortillas in the Mexican restaurant we visited. And then there was this:

I think the sign for Gott’s Roadside says it all. 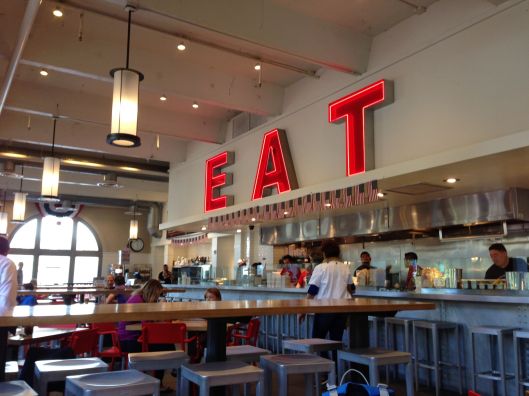 Gott’s is a great place to eat in the iconic Ferry Building, which has a lovely market along the lines of Chelsea market in NYC (but less crowded, more pleasant to stroll through, and including gorgeous fruits and veggies from local farmers).