NB: Zombie posts today and Friday, while we are in New York!

Do you have a bedside table or bookshelf groaning under the weight of masses of unread volumes? I do, but at least I can say that the books have been recently dusted and re-organized. I culled the ones I have read, and a few goners (why did I ever buy Thomas Keller’s Ad Hoc at Home? I never got past the picture of a pig on the front.)

Then there were the ones that have been sitting there for a long time–sometimes for YEARS– unread. They have survived several cullings because I think I ought to read them, or someone gave me the book, or I found the cover copy intriguing. I can’t bear to give up on them. And yet, I’ve never managed to read them.

Jigsaw: An Unsentimental Education, by Sybille Bedford. “The narrator, Billi, tells the story of her apprenticeship to life, and of her many teachers: her father, a pleasure-loving German baron; her brilliant, beautiful, erratic English mother; and later, on the Mediterranean coast of France, the Huxleys, Aldous and Maria.” Shortlisted for a Booker Prize. This one is the longest resident on my shelf. It survives every purge, but I never actually read it. What am I waiting for? 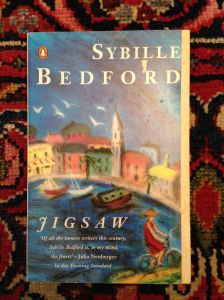 A novel/memoir of growing up in Germany, Italy, England and France during the 1920’s and 30s.

The House at Tyneford: A Novel, by Natasha Solomons. “It’s the spring of 1938 and no longer safe to be a Jew in Vienna. Nineteen-year-old Elise Landau is forced to leave her glittering life of parties and champagne to become a parlor maid in England. She arrives at Tyneford, the great house on the bay, where servants polish silver and serve drinks on the lawn. But war is coming, and the world is changing.” The book promises a romance between Kit, the heir to Tyneford, and parlormaid Elise. But can it come to anything? 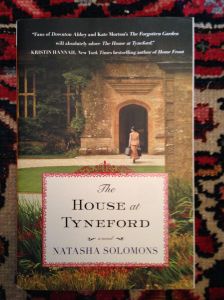 “Fans of Downton Abbey will absolutely love this.” Maybe I can’t get myself to read it because I have been disenchanted with Downton since the second season?

The Thoughtful Dresser: The Art of Adornment, the Pleasures of Shopping, and Why Clothes Matter, by Linda Grant. From my mother, I learned why clothes matter and how to appreciate beautiful clothing worn by other people. But I did not inherit her interest in sewing, shopping, and “the art of adornment.” In fact, I detest shopping and I grudge time spent on fussing over how I look, when I could be doing something more important like… reading. 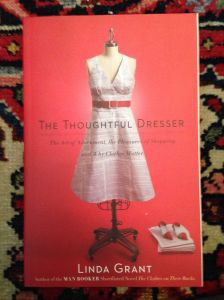 I NEED to read this book!

Baudolino, by Umberto Eco. “Born a simple peasant in northern Italy, Baudolino has two major gifts-a talent for learning languages and a skill in telling lies.” Set at the beginning of the 13th century, it’s the tale of Crusades, troubadours, the Holy Grail, Prester John… very intriguing. Then why didn’t I manage more than a few pages? Eco recently passed away, causing me a spasm of guilt that I hadn’t managed to read the guy’s book while he was still around. You never know, I might have loved it enough to write him a fan letter. 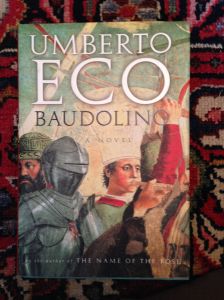 The Dream of Scipio, by Iain Pears. “Acclaimed author Iain Pears intertwines three intellectual mysteries, three love stories, and three of the darkest moments in human history. United by a classical text called “The Dream of Scipio,” three men struggle to find refuge for their hearts and minds from the madness that surrounds them in the final days of the Roman Empire, in the grim years of the Black Death, and in the direst hours of World War II.” Intellectual mysteries and love stories? I’m in! Darkest moments in human history? Ummm, not so much. 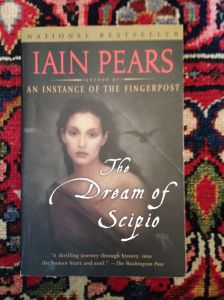 This fellow is praised to the skies. But I couldn’t get through “An instance of the fingerpost” either.

The other “iffy” books are the ones I made a start on, and got bogged down in. I like to finish a book once I start, but I’m very fickle from one night to the next. If the book doesn’t lasso me right away and keep me engaged in the story, I tend to turn to something else. What grabs me is unpredictable. I loved John Banville’s The Sea, a book many other people found boring and plot-free. But I couldn’t manage to finish Donna Tartt’s The Goldfinch, which drew comparisons to Dickens for its storytelling. 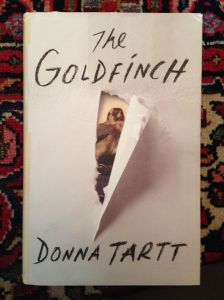 An Echo in the Bone, by Diana Gabaldon. I think this is number six in the Outlander saga. Book One, Outlander, is one of my all-time keepers. I read it when it first came out, and raved about how it reversed all the conventions of the romance novel while delivering a gripping, moving, funny story that was impossible to put down. Installments two and even three were acceptable. But lately the writing has become unbelievably turgid and bloated. I kept waiting for her to give Jamie and Claire’s story a beautiful ending and write something with NEW characters… it never happened. 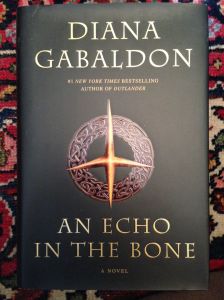 Even her most devoted readers give this terrible ratings. But, it’s Jamie and Claire! Will I end up hating them and praying for them to die, die, die?

A Dance with Dragons, by George R. R. Martin. “In the aftermath of a colossal battle, the future of the Seven Kingdoms hangs in the balance—beset by newly emerging threats from every direction…” This is Book Five in the series. I began reading these before the television show, and found them mesmerizing at first, if a little too ample. But Martin seems to have no ability to create a story arc. He kills off the sympathetic characters, constantly adds new characters, and drags out the plots endlessly. About 5,000 pages later, he still has not explained the nature or origin of the ice zombies who appear in the first pages of Book One and seem to be the ultimate threat to the Seven Kingdoms. At this point, I’m having trouble caring. 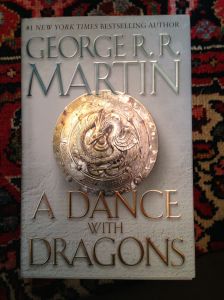 Where have all the editors gone? Looooong time reading. When will they ever learn?

So, fellow readers, what about these books? Should they go back on the shelf for another try, or should they be donated to the Friends of the Library book sale?