Hash browns or home fries? I love both, but I confess a definite partiality for hash browns, which I define as grated potatoes formed into cakes and fried. (Home fries, on the other hand, are diced potatoes.) Either preparation can include onion, and home fries often include peppers. But the hash brown is the simpler of the two, the pure essence of potato. There’s something about the contrast between the two crispy outer surfaces and the soft, luscious interior that makes hash browns unique. 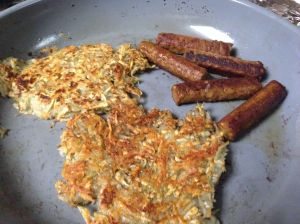 I used to consider hash browns at home a time-consuming and difficult task. I might manage to produce a crispy golden crust, but the inside would still be raw. The secret turned out to be the microwave oven. Now I make them when I’m having a fried egg or sausage anyway, and I have an extra five minutes to grate two potatoes.

The intermediate step: microwave them.

These are a LOT less fatty than restaurant hash browns, and they don’t have the dextrose and chemicals found in the frozen variety.

35 thoughts on “Hash Browns at Home”