Did you know there is such a thing as Sriracha Rooster Sauce fan art? If I were to describe Amber’s room, it would definitely include a poster of this hot sauce bear. For more hot images including Christian Bale slathered in the red stuff, see Thrillist. 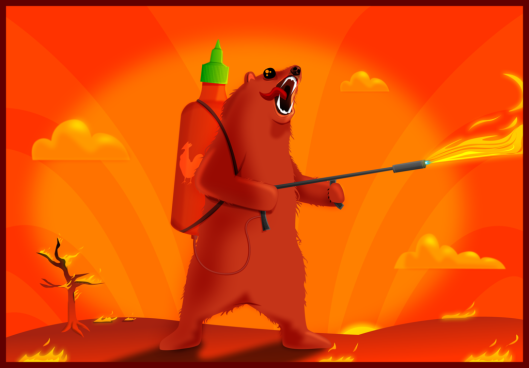 The “Sriracha Flamethrower Grizzly” by Oatmeal. Click for source.

Ever wonder why the girls in your social circle avoid hooking up? You’ve been friends with her for ages and she knows she can trust you, yet she goes home with some douche she’s just met, or a guy in her Econ class with 200 people. I can see the experienced men among you nodding your heads in agreement. Once you become friends, a girl will worry about how sex might change the relationship. Tip: if you want to bag a girl in your social circle, don’t tell her your secrets, go shopping with her, or let her cry on your shoulder about other guys. Keep your distance until you’re ready to move. –Inclusus Amator

“Amber, have you ever tried one of those warming gels?” asked Joan Kowalski, who shared Amber’s apartment. She and Gabrielle Golden were Amber’s closest friends; the three had been assigned to the same freshman orientation class section, along with Tommy Walczak. Amber suspected the sections had been enrolled based on personal interest surveys filled out by freshmen, for several students in that section had gone on to take Latin.

“Warming gels? You mean, like for sex?” Amber wasn’t surprised that Joan had sex on her mind. They all did. But Joan, a tall, raven-haired beauty, was the most adventurous of them, having worked her way through a substantial cohort of Parnell undergraduates, and then moved on to sleep with grad students, law students from the city who trolled Parnell’s bars for innocent but comely freshmen, and the odd band member or bartender.

“Yeah. Does it help you get the big O while you’re in flagrante delicto?”

“Nah, it just makes you feel warm,” said Amber, who had been disappointed with her purchase of an expensive tube of the K-Y product. “You can get the same effect by mixing a couple of drops of Rooster sauce with some peanut oil.” Her mother Ellen’s obsession with Asian cooking meant that Amber had developed a liking for hot sauce, and she had long since figured out how to use it in more esoteric ways.

“No way. I’m not putting Rooster sauce on my mink.”

Amber shrugged, making eye contact with a hot-looking guy at the bar in Tully’s, where they were enjoying a drink. “Suit yourself. When I hooked up with Guy, he thought it tasted really zesty.”

This got Joan’s attention, because she hadn’t yet slept with Guy Gislane, a junior with close-cropped blond curls, a sexy quarter-inch stubble on his face, and (for a Classics major) a stunningly athletic body. He played basketball, and looked more like someone from the school of Exercise, Leisure and Sport than a brainy Classics type. “Okay, Hot Lips. Maybe I’ll give it a shot. And speaking of shots, let’s get another round of Cuervo Gold. Unless you want to switch to margaritas?”

“No way,” protested Gaby. “I don’t need the extra fluid. I hate cathing myself in the restroom here.” Gaby was in a wheelchair, and like Amber, took classes in both Latin and in Poli Sci, her major. She was, however, an indifferent student, devoting most of her time to a plethora of left-wing advocacy and protest groups on campus. Her latest cause was a pressure campaign to get the university to upgrade its handicapped restroom stalls. In all of the older buildings on campus, these stalls had flimsy plastic curtains instead of doors, and afforded very little privacy. Tully’s single unisex restroom had a different problem: the lock on the door was chronically out of order.

“Making any progress on potty parity?” asked Amber. She needed to come up with a service learning project herself. It was a requirement in Citizenship and Civic Change, a Poli Sci course in which both she and Gaby were enrolled.

Gaby scowled. “Not really. I tried to get in to see President Baudet, but they keep putting me off. The only bright spot is that I can use the project in half my classes. Not only does it count for service learning, but Mr. Hernandez said it could be the basis for my short story portfolio in The Craft of Short Fiction.”

“What? Are you going to write about catheterizing yourself and then turn it in to Mr. Hernandez? That seems pretty personal.”

“Girl, when are you going to figure out that the personal is political? If I got a story like that published, it could make all the difference.”

Amber had seen samples of Gaby’s writing. She refrained from comment.

“How’s our favorite Gorgon?” This was Tommy, coming up behind Gaby to ruffle her boyishly short hair. Tommy himself had luxuriant dark locks, which he often wore in a ponytail, or even a braid, and large brown eyes with long lashes. He was big, and almost too well-fed, with the beginnings of a beer gut, yet noticeably muscular. Much to Gaby’s disgust, he treated her like a sister, and never showed any signs of a lech for her. All too often, men either placed Gaby in the same off-limits category as heavily pregnant women, offering exaggeratedly chivalrous yet pure attentions, or worse, pretended not to see her at all.

“I’m really in the mood to turn some guy’s dick to stone,” answered Gaby. She always did her best to counter the asexual martyr thing. Tommy looked scandalized. He sat down beside Amber with his draft Bass ale and began talking about Dr. Kavanagh’s class. He was planning to do his report on the “Sex and Women” section in Men’s Health magazine online.

“That’s when someone hooks up with Tommy,” said Gaby nastily.

“Honestly, what did I do to deserve this?” pleaded Tommy, rolling his eyes. “Which site did you pick, Amber?”

“Just this afternoon I found something local,” she said. “It’s advice for men on hooking up, by someone at Parnell. The weird thing is, the author uses a Latin pen name, Inclusus Amator. I wonder if it’s someone we know.”

“Oh, I don’t know,” said Amber, smiling. “Maybe he’s a disciple of Ovid.” She had read Ovid’s manual on seduction, The Art of Love, with great interest.

“Want to go over to Diggers after this?” said Tommy, growing bored with the topic. “Pyewacket’s playing there tonight.” Pyewacket was a local band which favored covers of Cream, Pink Floyd and Led Zeppelin.

“God yes,” said Joan. “Their drummer is the best-looking man I’ve ever laid eyes on in this town.”

“You have an old-guy fetish,” said Gaby. “He’s got to be almost forty.”

As luck would have it, Jake, the hot guy Amber had eyed at the bar, turned up at Diggers too. Though Tommy hung around Amber, gazing soulfully at her with his melting brown eyes, she decided that it would be a bad idea to jeopardize their longtime friendship by having sex. Instead, she hooked up with Jake, a senior finance major who invited her back to the house he shared with three roommates, one a woman. They watched Buffy for a while, feeling each other up beneath a Coors Light throw blanket, and then discreetly retired to Jake’s room and shed their clothes. Amber felt she had chosen well, for Jake made her come with his fingers and lips before rolling on a condom and enthusiastically fucking her in one position after another.

“Whew,” she said, when he was finally satisfied. “What did you say your major was?”

“Finance. But my real ambition is politics. I’d like to be a congressman someday.”

It was only as she rode home on her Vespa early the next morning that Amber recalled the column by “Inclusus Amator” on hooking up with friends. He had predicted her behavior quite accurately. Maybe this guy knew what he was talking about. She found herself looking forward to reading more of his work.

Notes: This week’s title is a play on the Kama Sutra but also (as Francophone readers will recognize) on the name of “President Baudet.” At my institution, by the way, many of the restroom stalls for disabled people have a flimsy shower curtain instead of a real door. 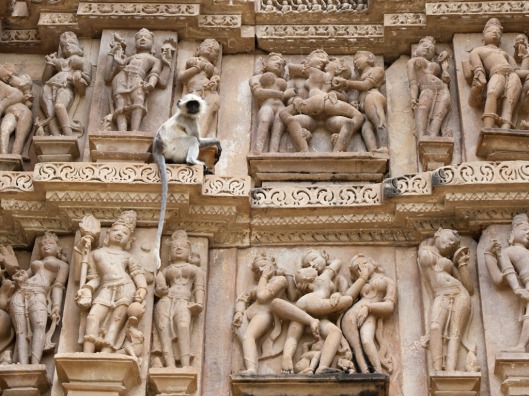 Eros and a monkey at the UNESCO World Heritage site of Khajuraho.

4 thoughts on “The Libertine Belles 4: The Congress of an Ass”