Recently I stayed in a college dormitory and ate dining hall food during a four-day conference. I cannot recommend this if one is past the age of thirty. However, I was fascinated to see what sort of food they had on offer.

Breakfast was my favorite meal, except that the dining hall had no trays, so one had to individually carry plates, glasses, bowls, and silverware to a table (in some cases, upstairs). By the time I finished ferrying everything around, my fried potatoes were cold. 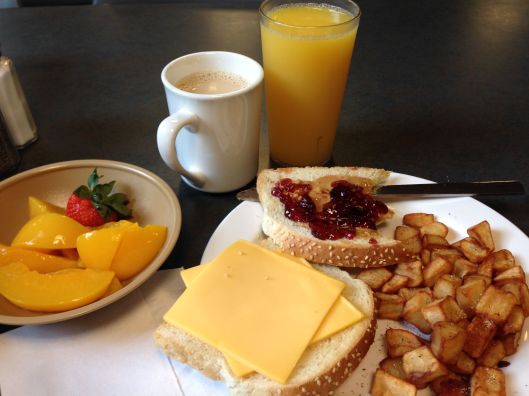 Canned peaches, “American” cheese, peanut butter and jelly, and plenty of orange juice. If I actually lived in the dorm, I’d have a serious problem staying away from the potatoes.

Only once did the orange juice machine break down, but that was enough for me. Nothing makes me grumpier than having to drink cranberry juice, or worse, no juice at all. As for the coffee, it was not very good.

I need not have worried about finding vegetarian food. There’s always the salad bar, although I hate salad bars. This one had all sorts of interesting things, including cubes of tofu, edamame, and canned artichoke hearts, but I stuck with the greens, which were nice and fresh. 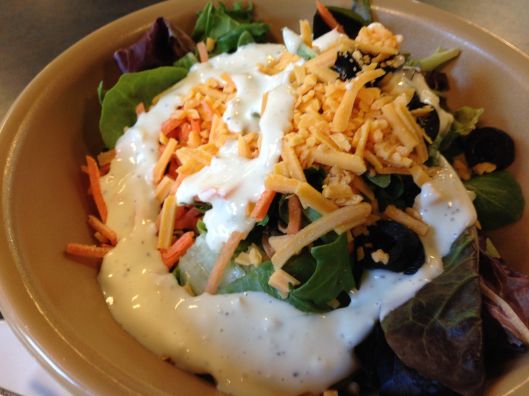 I have added an obscene amount of dressing, but it came in jumbo squeeze bottles that expelled the stuff in large quantities. This is the “blue cheese” dressing.

And now for dinner. The problem here was the “potluck” style of the offerings. Unless you choose carefully, you end up with an incoherent mix of flavors. On the good side, they always had at least one vegan entrée, which never was the case when I was a student. The times they are a-changin’! 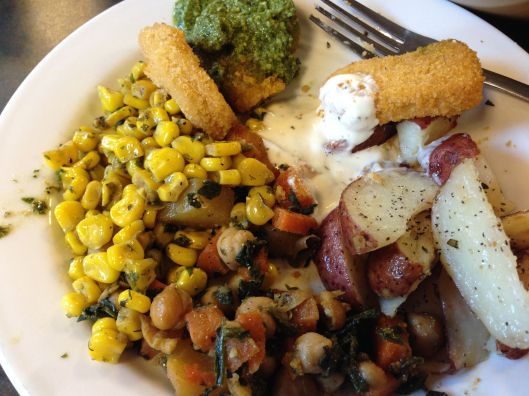 On my visits to the dining hall, I often met with Japanese high school students, there to learn English. They found the food perplexing. Some loved the breakfast food (especially the eggs and bacon), and some were pining for their morning miso soup, just as I long for orange juice. But they were all boys and very hungry, so they experimented with the bounty that was to hand.

21 thoughts on “Food From A University Dining Hall”