Recently I had the pleasure of perusing old books and special collections in Philadelphia, the City of Brotherly Love and Really Good Tapas. Here are a few bibliophilic highlights (culinary highlights are in separate posts). The Library Company in Philadelphia, “America’s oldest cultural institution,” originated as a subscription library, and was founded by a young Ben Franklin in 1731. It is now a research library with exhibits open to the public. 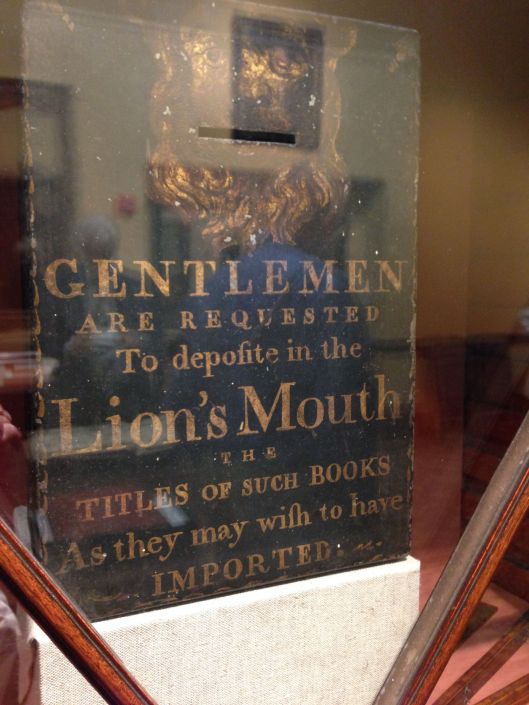 The “Lion’s Mouth” had a slot into which members could deposit their requests for books. Apparently, Ladies were not invited to participate.

This copy of Cicero’s “Cato Major” was printed by Ben Franklin. I love the eighteenth-century typographical style of the title page.

This is a “life mask” of George Washington. They also have death masks of Lincoln and Napoleon.

Shelved books at the Library Company.

The Free Library in Philadelphia is quite a cultural institution itself. The Neoclassical structure was built 100 years ago.

Perhaps its most famous occupant is Grip, a raven who was kept as a pet by Charles Dickens. When Grip died, Dickens had him stuffed. Grip appeared in the novel Barnaby Rudge, which was reviewed by Edgar Allan Poe, and he is believed to have inspired Poe’s work “The Raven.” 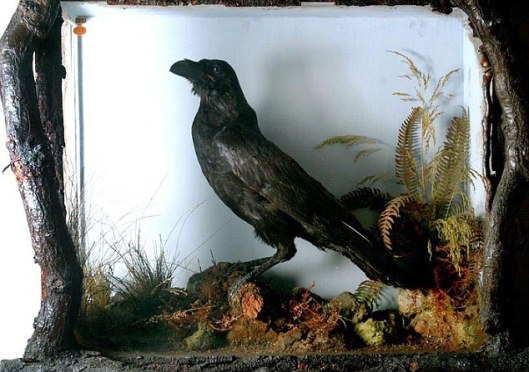 Grip is displayed inside a glass case with naturalistic decorations. Very Victorian!

The Elkins Room of the Free Library contains the actual physical furnishings of the library owned by William McIntire Elkins, who formed major collections of Dickens, Goldsmith and Americana. (No doubt he was the one who bought Grip, who resides just outside the Elkins Room.)

When Elkins died in 1947, the library was moved along with the books.

Hanging just above the cube-shaped bookshelf on the left is a framed map drawn by Doctor John Dee, the Elizabethan astronomer and magician. It was taken on a voyage to the New World. When the expedition ended in disaster, the map was returned to England and resided with the Percy family until Elkins bought it.

At the Historical Society of Pennsylvania, I saw some amazing pieces of Americana. Martha Washington’s cookbook has been published and is an interesting read for anyone interested in culinary history. When I viewed it, it was open to a page with a recipe for “Surfit Water of Poppies.” Surfeit water was a medicinal water thought to ease the symptoms of overconsumption! The poppies were not opium poppies, but the wild poppy of the United States.

Martha Washington’s cookbook. With a recipe for “Surfit Water of Poppies.”

The Penn family papers include this receipt for land bought from Indians in Fort Stanwick PA. The Native Americans received $10,000 and signed their names by drawing pictures of animals. The document dates to 1769. 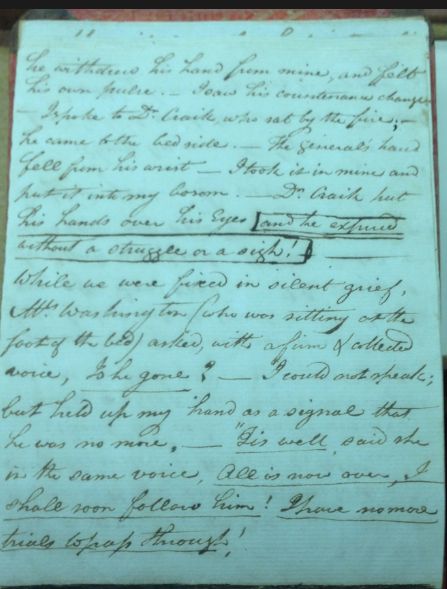 An eyewitness account of George Washington’s death by his secretary Tobias Lear: “and he expired without a struggle or a sigh!” No wonder, since 40% of his blood was drained by the physicians trying to cure him.

My favorite item on the trip was this draft title page for Charles Darwin’s Origin of Species. Originally he had a different title in mind, but his publisher convinced him to change it. This precious sheet of paper resides in the American Philosophical Society Library.

Another highlight was the Rosenbach Museum, the former home of famous Philadelphia book dealer Abraham Rosenbach. Dr. Rosenbach collected portraits of members of the Gratz family, a prominent Philadelphia family to whom he was related. These portraits show Benjamin Gratz and his beautiful wife.

Portraits of Benjamin and Maria Gratz by Thomas Sully (1830s). The painting hanging above Maria’s portrait is a copy.

I enjoyed this portrait of the Doctor himself, which hangs in his former study. The only thing missing is his glass of whiskey. 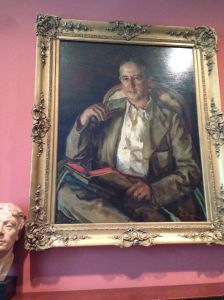 Abraham Rosenbach, with a bust of Keats below left.

Rosenbach dealt in some very high-end books. He bought the original manuscript of Alice in Wonderland, which had belonged to Alice herself. (He ended up donating it to the British People.) Among the books he could never bring himself to sell, we saw a first edition of Bram Stoker’s Dracula with the only known dust jacket, and a copy of the Eliot Indian Bible, the first Bible published in the U.S. And it wouldn’t be a Philadelphia institution without a Franklin item…

The University of Pennsylvania’s Rare Book Collection includes this treasure, a 1611 Hamlet, printed while Shakespeare was still alive.

Shelving at the Rosenbach Museum…

Yes, dear Reader, I was in heaven the entire time (the restaurants were good too). I even managed to purchase a wee bibliophilic souvenir, printed in Ben Franklin’s lifetime… 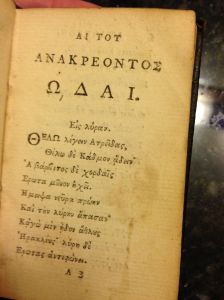 The Odes of Anacreon, printed in Glasgow by the Foulis Brothers in 1761. This is one of my tiny books, only three inches tall.