I didn’t have plans to watch Pompeii. Most of my Classicist friends said they barely lasted fifteen minutes before switching it off. But someone gave me a DVD.

Thar she blows. Screencaps by Linnet.

As a matter of fact, it’s not that bad. (The good thing about low expectations is that you cannot be disappointed.) In Yiddish terms, the film is kitsch (overly sentimental) but not schlock (poorly made). The scenes of Pompeii itself are lovely, surprisingly accurate reconstructions, and the gladiatorial fights are reasonable approximations. The gladiator costumes are especially good. Even odd details like the masked “Greek chorus” who introduce Senator Corvus’ bloody entertainments in the arena are at least based on something historical.

The “chorus” in action.

The eruption of Vesuvius too is (relatively) accurately depicted, down to the early-warning earthquakes, the rain of ash and pumice, and the pyroclastic flow. The filmmakers couldn’t resist adding a spectacular rain of lava bombs for the sake of 3D. Obviously that never happened, or Pompeii would not be as beautifully preserved as it is. And the lava bombs quickly become tedious. What IS it about male directors and explosions?

Of course there are some gross departures from cultural accuracy. When Corvus has his soldiers abduct Cassia, they manhandle and abuse her in a way that would never happen in real life. Cassia was Corvus’ intended bride, so any insult to her would be an insult to him. But this is typical of the writers’ approach: Corvus is basically Snidely Whiplash, a villain straight from a 1920s melodrama. As long as you accept this convention, you can enjoy Keifer Sutherland’s arrogant Roman Senator, in spite of the fact that, looks-wise, Sutherland seems to be morphing into late-career William Shatner. I confess that I longed for his papa, Donald, to step into the role.

The main attraction is of course Kit Harington, who plays Milo the Celt, a slave gladiator who has a star-crossed romance with rich girl Cassia. Never mind the fact that a “Celt” bears the Greek name of Milo. Never mind that Milo has a quasi-magical ability to soothe horses, which he supposedly learned as a tot among the “Horse People” of Britannia, before they were exterminated by the Romans. Never mind that Milo has superhuman powers of endurance, given that fifteen bloody lashes to his bare back have no effect on his gladiatorial prowess, and he fights dozens of men without tiring. A little adrenalin can do wonders! 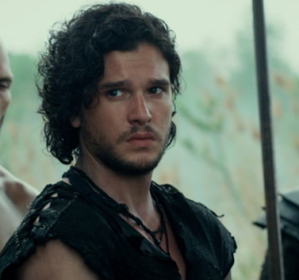 Maybe I just don’t have a cougar in me. 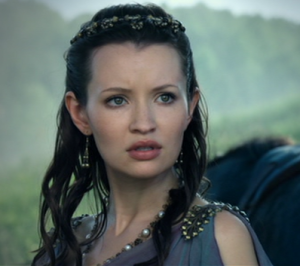 Emily Browning is well cast as rich girl Cassia. She looks pretty but peevish. I had to laugh when Cassia vehemently protested that she was “not a Roman” even though she lived a luxurious Roman lifestyle in a humongous Roman-style villa.

Kit Harington has very few lines, and his face remains impassive throughout. He reminds me of a young Keanu Reeves, pleasant to look at, but blank. This is why they needed the horse-whisperer strand of the plot, to endow Milo with something resembling a personality. Harington’s one great strength is his physical grace, and he excels in the fight scenes (just as he does on Game of Thrones).

The famous abs. Surprisingly, they are only displayed once, in this initial fight scene. 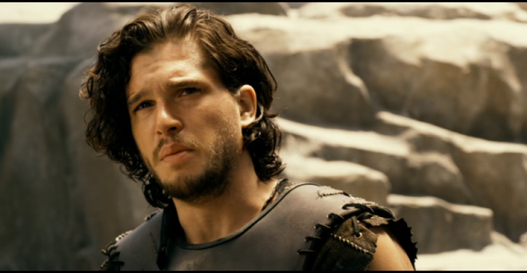 This is about as emotive as he gets, but on the plus side, there’s never a hair out of place.

Still, I’m getting tired of seeing him pitted against much larger men. They keep juxtaposing him with guys like Sasha Roiz (six foot four) or Adewale Akinnuoye-Agbaje (six foot two), both of whom I found more charismatic. The character of the African gladiator (oddly named “Atticus,” which means “the Athenian”) exploits two contrasting racial stereotypes of American film: the huge, scary, violent black man, and the sympathetic black slave yearning to be free. Still, Mr. Akinnuoye-Agbaje breathed life into Atticus.

I just wish Atticus did not have to spit all the time. What is it with men and spitting?

Adewale Akinnuoye-Agbaje is excellent in this role. And beautiful to look at.

Harington is five foot eight, but he seems Lilliputian. It is as though a Boston Terrier were to attack a series of Rottweilers, and win every time! 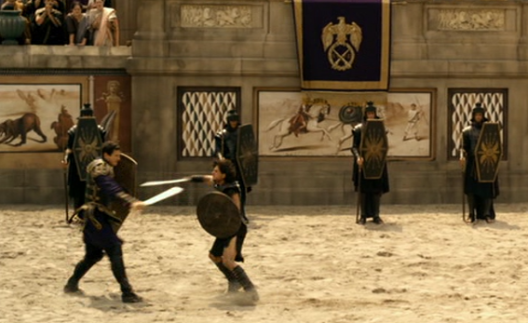 Russell Crowe was far more convincing in this kind of role. But I am thankful that Anderson did not mimic Ridley Scott’s favored style of cinematography, making the actors wander through a landscape of atmospheric Stygian gloom, like escapees from Wuthering Heights. They are in Italy! At least until the lava bombs start falling, the Mediterranean sun is reliably brilliant. I conclude with some caps of the beautiful digital scenery, the best reason to watch this film.

Cassia’s luxurious villa, on the coastline near Pompeii.

Another lovely shot of Vesuvius.

Nicely authentic: a street leading into the city is lined with tombs.