I am not a mother myself. But one sentence in this week’s chapter always moves me, no matter how many times I read it. 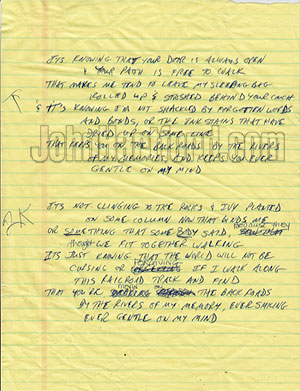 John Hartford’s original lyrics for “Gentle On My Mind.” Click for source: johnhartford.com

9. He Who Reigns Within Himself

This would all be very entertaining if it wasn’t happening to me. She was trapped in the elevator with a man who was clearly terrified at being in such close quarters with her. A very good-looking man. In other circumstances it might have been rather sexy. For the first ten minutes after the Doomsday Voice spoke, they stood at opposite ends of the elevator, silently digesting the news. Finally Jennet said, “If you don’t mind, I’m going to sit down.” She sat facing the door, and leaned against the back wall of the elevator.

After a moment’s hesitation, he sat beside her, gracefully folding and then unfolding his lanky frame to extend his long legs. His feet were clad in black Converse All Stars with white laces. Another five minutes went by. All right. I’m going to take the bull by the horns. Without looking at him, Jennet said, “Is it true what they say? About you hating women?”

A deep sigh emanated from the body next to hers. “I don’t know. Maybe.”

“Some of you are, yes.” He sounded unrepentant now.

“And men aren’t?” She tried to keep her voice low and calm.

“I can only speak from my own experience,” he said. “I don’t expect you to agree.”

“I don’t want to discuss it,” he said flatly, and she accepted this in silence. After another minute or two, though, he spoke again. “I was adopted.”

“So what? I’m adopted,” said Jennet. “My birth mother gave me up too. That doesn’t mean she was a bad person.”

“Do you remember yours?”

“No… “ Jennet was surprised at the question. She’d been adopted at birth, and had never known her biological mother. She felt no need to contact her.

“I remember mine. She wasn’t a good person. When I was almost seven, she left me at a gas station and never came back.”

Jennet shuddered. She thought of Kyle at age six, with his tiny, hollow-chested body, his translucent skin. Back then he had seemed so vulnerable, both physically and emotionally. The very idea of Kyle or another small boy, standing forlornly at some gas station as the cars came and went… it brought tears to her eyes. “God, Jonathan,” she said, sniffling a little. She didn’t look at him. She knew he wouldn’t want her to.

“I have a son, Kyle,” she finally said. “He’s doing his M.A. in Journalism at Columbia.” It was his first year in graduate school.

“Are you serious?” He sounded shocked. “How old are you? I thought you were too young to have a kid that age.”

“I’m an old lady of forty,” she said, chuckling. People were always surprised when they found out about Kyle. Before he could do the math and ask about it, she added, “I had him when I was sixteen. And I’m about to become a grandmother. He and his partner Joel are planning to adopt a baby girl.”

They sat in silence a while longer. Without warning, the lights went out. It was eerily quiet, and Jennet could hear him breathing beside her. It reminded her of being in bed at night, in the dark, with a man. She missed that.

“And now you avoid women, is that right?”

“Why is it such a big deal to other people how I choose to live? Especially to women. Is the concept of celibacy so foreign to you?” he asked bitterly.

She laughed into the darkness between them. “Jonathan, I’m very familiar with the concept. After Kyle was born, I had to devote myself to him and to getting an education. There was a price to be paid, and I paid it. Later, I didn’t want to set a bad example by bringing home lovers. I went years without having a relationship or even a one-night stand.”

“And… and now?” His voice sounded a little strangled.

“Finally when he was in high school, I dated a few men and then found a partner, but it didn’t work out. After five years, we separated, right before I moved here.”

Silence. She wondered what he was thinking, and what time it was. She couldn’t see her watch. Abruptly, the lights came on and the car began to move. They both got to their feet and she heard him expelling a breath in relief. When the door opened, he shot out like a trapped animal being released from a cage.

Jesus Christ. What an experience. Sebelius walked quickly across campus, not looking back in case Jennet Thorne was behind him. If there was anything he hated, it was heart-to-heart talks. Talking about feelings. Even the therapist his father hounded him to see had finally given up on him, saying he “wasn’t ready to articulate his feelings.” And suddenly I spill my guts to the Woman? What the fuck was I thinking? Swetnam says a woman must be answered in silence. His heart was still pounding.

He went straight home, cleaned the kitchen and made dinner, then tried to work on a new paper about the conflict between Milton’s Puritanism and his call for progressive reform of England’s divorce laws. He found himself unable to concentrate. Every so often this happened to him, a certain excitable restlessness. Usually his fitness routine kept it at bay, but tonight was one of those nights. It’s not because of her. It isn’t.

He went to the basement to try a workout. The upper areas of Sebelius’ home expressed his adult self, the Milton scholar, the book collector, the academic, the fencer. There, he could retreat to a haven that reflected his personal tastes and interests. There, he listened to Renaissance madrigals and Baroque chamber music. The space below ground level, on the other hand, was pure Minnesota Lutheran. It was the domain of Stefan Sebelius’s son, who like his father was convinced that no house was complete without a basement (at least partly finished), as the good Lord intended. It was the safest spot in the house in the event of tornadoes, and the washer and dryer called it home. It was a place where skis were stored in the rafters, and tools hung in neat rows on pegboards. It was where Jonathan Sebelius kept a Nautilus weight machine, a rowing machine, a set of free weights, and an old CD player for listening to Glen Campbell and Johnny Cash, Led Zeppelin and The Who.

Tonight he used the Nautilus, taking care to warm up slowly, and focusing on his form. He planned to work himself hard.

And the summer sun might burn me ’til I’m blind…

The song moved him. He imagined himself fleeing, going someplace far away from Jennet Thorne, where he would be safe.

Through cupped hands round a tin can, I pretend to hold you to my breast, and find

That you’re waiting from the backroads, by the rivers of my memory

Ever smiling, ever gentle on my mind.

He fought it a little longer. He added more weight, and started a new set of ten repetitions. It was no use. He finished his reps, and rising from the machine, went to a closet and pulled out a file box.

He indulged himself for a while by flipping through the magazines, then selected one and took it to the basement bathroom. But as he stroked and squeezed his penis, he closed his eyes and the image that came to his mind was not of Bettie Page, but a Woman in a red bathing suit, stretching by the side of the pool. Arching her back. Floating face up, so that her tits breached the water’s surface. Bending over, so he could see her sweet, rounded ass. And later, the same Woman fully clothed, sitting beside him in an elevator, in the dark.

Notes: I enjoy John Hartford’s original bluegrass rendition of “Gentle On My Mind,” but the one I really love is Glen Campbell’s version. It’s a parable of masculinity, and helped me understand Jonathan’s character. I had the great good fortune of seeing Glen Campbell perform on his last tour. He suffers from Alzheimer’s these days, but he did a fantastic job, only needing one or two prompts to recall the set list. A true pro! 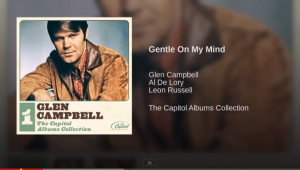 For the genuine bluegrass experience, here’s beautiful John Hartford. The picking in this one will blow your mind. Sadly, Hartford died in 2001 of lymphoma, but he won’t be forgotten. 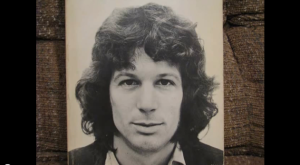 And just in case you aren’t familiar with cult pinup model Bettie Page, here she is with cheetahs and photographer Bunny Yeager. 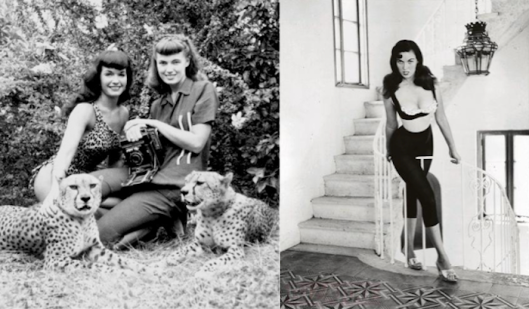 18 thoughts on “Sword Dance 9: He Who Reigns Within Himself”