I surprised myself with the rather cynical portrait of academia in this week’s chapter. As much as I support feminism, I am troubled by excesses of political correctness in the academy, and the way they can be co-opted to serve darker agendas. Equally appalling to me is the dominance of obscurantist jargon in the academic study of literature. Some terms of art are inevitable when dealing with technical matters, but all too often, jargon is a fashion statement, a sign that someone wants to belong to an exclusive club. 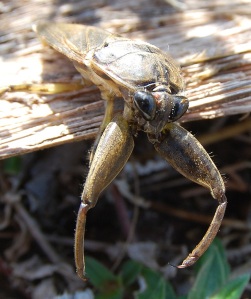 The Giant Water Bug makes a grisly appearance this week. Just think of him as the insect Moby Dick, but more evil.

The recently-formed PSU Task Force on Gender Parity, convened by the Office of Affirmative Action and Equal Opportunity, had just received its charge from Provost Messer to study “wages, climate and work-life balance” at the university from the perspective of gender, with particular attention to the Sciences, where there was a perception of bias against women. Its report was due at the end of the academic year, he said.

One of the twelve committee members raised his hand. “Yes, Professor Jenko?” asked the Provost.

“Might I suggest that we not limit our exploration of these important issues to the Sciences? The Humanities also suffer from rather insidious and less-recognized forms of gender bias,” he said. Jennet was surprised. From working in Chester Hall, she knew that about half the faculty in Classics were female, and that more than half in English were female. The numbers in History were not quite as high, but still healthy. She’d seen salary figures and noted no problems there. If anything, she thought, they ought to direct their inquiry to the upper administration, where the ever-expanding roster of Vice Presidents and Associate Vice Presidents was almost exclusively male. The only woman of Vice Presidential rank at the university was the one running the Affirmative Action office itself, and she had the smallest budget of any of them, as well as the smallest salary.

The Provost looked taken aback at Jenko’s comment, but said, “By all means, as long as you don’t neglect the specific charge to the committee.” After some further discussion about scheduling, the meeting was adjourned. As Jennet was gathering up her notes, she saw Jenko approach the Provost for a little chat. Ah. One of those. She knew the type; they always took every opportunity to ingratiate themselves with the power players.

Much to her surprise, Jenko caught up with her outside the building and introduced himself. “We’re the only two members from Humanities,” he said. “We ought to stick together.” She disliked him on sight. He was a smallish man, about her own height, and not noticeably overweight, but somehow… overstuffed. He wore a tight polo shirt, black jeans with a metal wallet chain, and cowboy boots. His skin looked as tightly packed as that of a sausage, and his gaze was simultaneously expressionless and predatory.

Jennet was reminded of a vivid passage from Annie Dillard’s Pilgrim at Tinker Creek, in which a giant water bug sneaked up to a frog, injected a dissolving enzyme, and sucked the living essence from it until nothing but a hollow shell remained. Jenko was just like that hard-shelled, lethal bug, looking for its next meal. She made a noncommittal noise and gave him a half-smile as she lengthened her steps.

“I noticed the signs on your door,” he said in his piping, nasal voice. “I’m delighted that you agreed to serve on this task force. We need more people with the courage to act on their convictions, don’t you agree?”

Instead of answering him, she asked, “How did you come to be interested in gender issues?”

“Oh, I’m the Graduate Coordinator for the Literacy and Rhetoric program in English. I’m very interested in gender parity and funding. As a matter of fact, we had a case a few years back where the Literature Ph.D. program coordinator insisted on funding only male students. Can you imagine?” He looked over at Jennet, confidently expecting her to share his horror.

“That certainly sounds bad on the face of it,” she allowed.

“Professor Sebelius,” Jenko said, shaking his head in pious disapproval. “A confirmed misogynist, and I say that more in sorrow than in anger. As a matter of fact, I think you may be working with him on the Dean’s advisory council,” he added, as though only just remembering. “On the tenure files. Tell me, has he shown any signs of discrimination in his handling of the tenure cases?”

Oh. He’s looking for dirt on Jonathan. “Of course I can’t discuss personnel matters outside the committee, Bill,” she said, trying not to betray the disgust she felt.

“Of course,” he agreed smoothly. “I would never dream of asking you to divulge any confidential information. But please feel free to come to me if Prof. Sebelius offends you in any way. When the previous complaint arose, I was instrumental in bringing it to the attention of Affirmative Action,” he boasted. “In fact, I gave testimony myself.”

She looked over at Jenko and met his eye. “I see. Well, Bill, I definitely won’t forget that.” He nodded, and she could tell he was satisfied with his afternoon’s work.

“I trust Bill Jenko about as far as I can throw him,” said Juniper Jamieson. “I’ve heard plenty about his antics from my friend Laura. That slimy little turd is begging for a vigorous ass-kicking,” she added fervently. Juniper was a martial-arts aficionado, and passionate about self-defense for women. She became more animated than usual whenever there was any prospect of ass-kicking, especially if the presumptive recipient of her steel-toed boot was of the male gender.

Jennet grimaced at the scatological reference and set down her French Dip roast beef sandwich for the time being. They were eating lunch in the Parnell Brasserie, and Juniper was explaining how Jenko had paid her an unexpected visit.

“Owen told me he came nosing around when I wasn’t there, but refused to leave a message. Then he showed up at my office hours. He wanted to know whether we Classicists would be interested in a new departmental configuration, a kind of merger with English.”

“That’s odd,” said Jennet. “I had a visit from Tilda Blumenthal a few days ago. She said she was going around the building to meet all the new faculty. But she brought up the same idea and asked what I thought of it.” Tilda was a faculty member in English. When Jennet asked her what her research specialty was, she’d said Rhetoric. Intrigued, Jennet mentioned her own interest in the Greek orators Demosthenes and Lysias. Tilda had looked impatient and said, “Not that kind of Rhetoric. What I do is more along the theoretical axis. Interrogating the textual interstices of everyday life.”

“Oh,” said Jennet. She’d had no idea what Tilda was talking about.

“They’re up to something, kiddo,” said Juniper. “I can smell it.”

Jennet hoped Juniper did not plan to describe the smell. Sometimes her friend reminded her, rather annoyingly, of a boisterous Kyle at age fourteen. “But why would English want to merge with Classics?”

“Dunno. Maybe they think there’s strength in numbers. Jenko tried to threaten me with the idea that Classics is so small, we risk having our program cut if we don’t merge. Then he laid on a serving of odoriferous crap about how English faculty have lighter teaching loads than we do, so we would benefit from the merger.”

“Well, if I was going to be in a different department, I’d rather it be History,” said Jennet.

“You haven’t met many of the History faculty, have you?” said Juniper.

“No, just the chair, Torvald Simpson.”

“Yeah, well, excuse me a moment,” replied Juniper. “I gotta go to the Torvald and wipe my Simpson.”

Notes: I had my little joke with “Provost Messer,” Messer being the German word for “knife,” and Provosts being known for their love of cutting budgets.