TV and film-wise, I usually come late to the party. I like to watch things at my own pace. So there was a bit of a lag before I got around to Cosmos, even though I have been looking forward to seeing the re-boot of one of my all-time favorite shows. 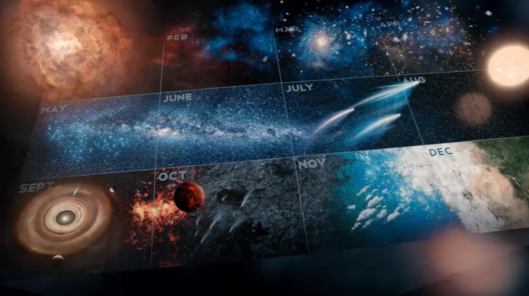 The “cosmic calendar.” Screencaps by Linnet. 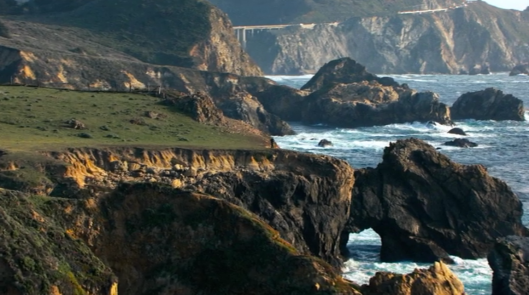 A tiny figure stands alone on a rocky coastline…

The new version does not disappoint. Visually, it is stunning, the pace never drags, and Neil Tyson is a natural as the host. He radiates charm, charisma, and intelligence. Several aspects of the new series surprised and delighted me.

First of all, series writers Ann Druyan and Steven Soter are not afraid to deal directly and candidly with the conflicts between science and religion. The tone is never harshly critical of religion, yet they get right to the point in the very first episode, with an animated sequence telling the story of Giordano Bruno.

An image of Bruno the freethinker and the joy he took in the wonders of the cosmos.

Bruno, a disciple of the Roman philosopher Lucretius, was tried for heresy and burned at the stake in 1600. His “crime” was expressing the view that the universe was infinite, that the stars were distant suns, and that life might exist on other planets. The animation vividly conveys the horror of what was done to him in the name of religion (though I am glad, for the sake of younger viewers, that his final agonies are not shown).

Gagged and bound, Bruno is led to his execution in the Campo de’ Fiori at Rome.

Time and time again, religion has enforced human ignorance and stood in the way of knowledge, often at great cost to civilization. Where religious predictions of the future have repeatedly failed, scientific knowledge allowed Edmond Halley to accurately predict the return of the comet named for him. I’m glad that the writers of Cosmos were courageous enough to point this out.

The series retains certain features of the original, co-written and hosted by my childhood hero Carl Sagan. There is the cosmic calendar, which represents the 13.8 billion-year history of the universe through the metaphor of twelve months. On this scale, the Sun and Earth are formed in August, the first life in September, and the first humans on December 31, toward the close of the day. 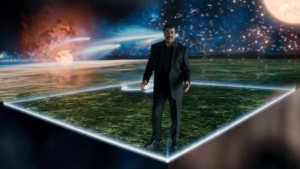 Tyson stands on the month of December and points to the tiny dot representing human history.

Like many fans of the original Cosmos, I was less than enthused at the return of the “Spaceship of the Imagination,” the visual device used to explore the universe at the atomic, molecular and cosmic levels. The writers stuck to the concept, but it works better this time around. The interior of the ship is dynamic, and there are lots of Star Trek-style shots of it nipping about the galaxy. Still, it looks rather like a giant Norelco electric shaver.

Episode One includes a moving tribute to Carl Sagan, who spent a Saturday in 1975 with the teenaged Neil Tyson, trying to recruit him to Cornell’s program in astronomy. Tyson chose Harvard instead, but said of his meeting with Sagan, “I already knew I wanted to become a scientist. But that afternoon, I learned from Carl the kind of person I wanted to become.”

Carl Sagan’s desk calendar from 1975, with his notation of a meeting with a promising young astronomer from the Bronx…

Episode 2, “Some of the Things Molecules Do,” covers evolution, using the metaphor of the Tree of Life to show how all living things on earth are cousins. When you compare the DNA, it’s easy to see that we are directly related not only to apes, but also to fish, mosquitoes and trees. To me, this is a more profound spiritual concept than any idea generated by the world’s religions.

I particularly enjoyed the demonstration of the steps in the evolution of the eye, an organ creationists like to argue could not have arisen through natural selection. What a brilliant idea, to show a continuous “creature’s eye view” as the structure of the eye evolves. It was news to me that early on, sea creatures had excellent vision. Emergence onto the land, in fact, created certain problems which natural selection has never quite overcome.

My favorite moment in the episode is the appearance of the tardigrade, perhaps the most amazing creature on earth. It is the size of a pin head, and can withstand absolute zero or boiling temperatures. It can survive the pressure found in deep ocean trenches, and even the vacuum of space. It can go without food and water for ten years. Not only that, but it’s really cute! 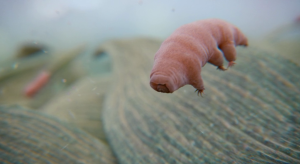 The chubby little tardigrade, a “micro-animal” with eight legs and a mouth. Its name means “slow stepper.”

The other thing I love about this version of Cosmos is its celebration of scientists–not just the famous ones everyone knows (though Isaac Newton gets plenty of attention), but the unknowns whose contributions have nevertheless been fundamental. They turn out to include a number of women, like Cecilia Payne, who has been called the founder of modern astrophysics, and Annie Jump Cannon, a Deaf woman who created the modern classification scheme for stars.

Why is it that every American knows who LeBron James is, but few have ever heard of Ibn Al-Haytham, Michael Faraday or Cecilia Payne? Truly, these heroic and inspiring stories should be required viewing for every family with children.

Carl Sagan would have been thrilled with this show, and in it, his spirit lives on to inspire and delight us. Thanks for everything, Beautiful Man! 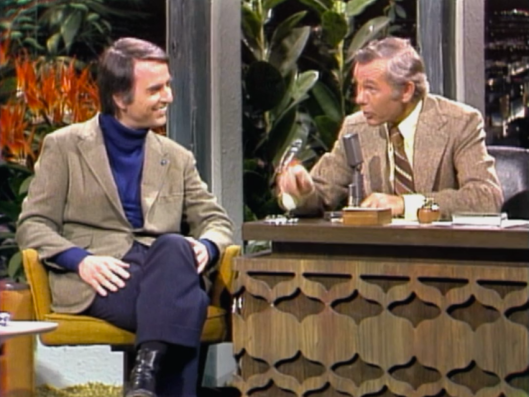 14 thoughts on “The Beauty of a Godless Cosmos”