Dublin, it turns out, is a great town for all the things I like. Walking. Viewing gardens with water features. Having a pint. Oscar Wilde. Seeing a play. Really good cheese (at breakfast!). Strolling beside a river. Vikings. William Butler Yeats.

Our trip began inauspiciously with fears we might miss the connection from Boston to Dublin, but it always helps when you have good onion rings. These thin-cut rings are from Great Lakes Brewing Company, served with spicy ketchup and my favorite Eliot Ness Amber Lager! 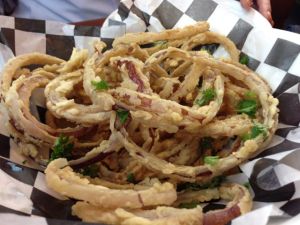 A groggy and jetlagged traveler’s first view of Dublin: Grafton Street on a drizzly October day–from beneath an umbrella.

Things are looking up! It turns out that Dubliners have good pizza. This tomato, basil, pesto and mozzarella pie is from Milano’s.

A shop selling nothing but whisky is a novelty for me. My favorite is “Writer’s Tears.”

When we arrived at Stephen’s Green, the rain had miraculously stopped, thanks to Saint Ciarán of Clonmacnoise, the heavenly helper who oversees all my Hinds-related travels. So it was that the Yeats memorial, sculpted by Henry Moore, appeared to my wondering eyes in a nimbus of green light. 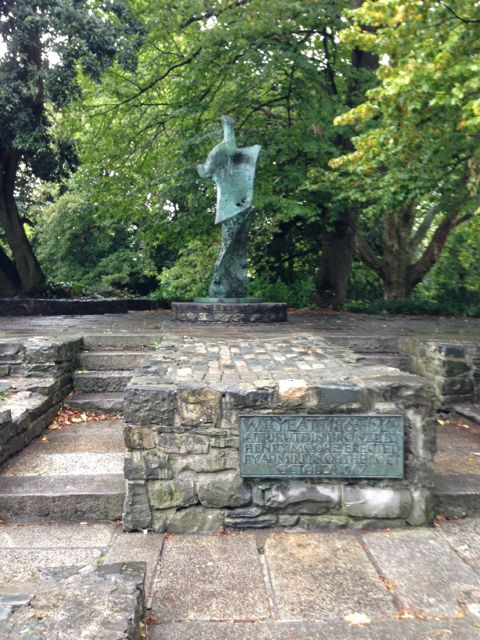 The spirits of Joyce and Yeats are everywhere in Dublin, which is even more a writer’s town than London. Whatever it is in Dublin that attracts the Muse is far more concentrated.

Stephen’s Green immediately became one of my favorite places.

I didn’t have time to examine the bookshops or galleries, but there’s nothing like a city where you can see this in a shop window. 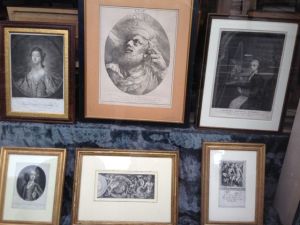 In Dublin, the street lamps are shaped like bishop’s croziers. 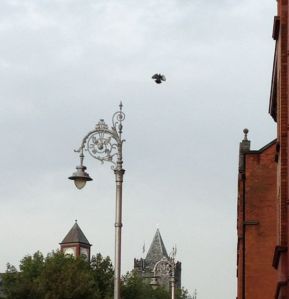 A pint in McDaid’s pub, where Brendan Behan, James Joyce, Patrick Kavanagh and Flann O’Brien are all said to have been in residence at one time or another. Looking the place up online, I find that it is also a treasure house of Irish slang: witness these remarks made by well-oiled old timers to attractive ladies in the house:

Pint of the black.

When good little book collectors die, this is where they go: the Long Hall at Trinity College.

In the National Library there is a permanent Yeats exhibit. These are reproductions of the original masks used to stage Yeats’ Cúchulainn cycle at the Abbey Theatre. 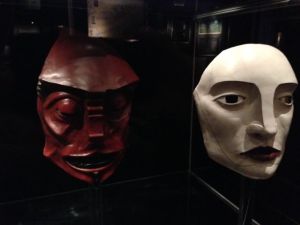 I never get tired of museums. The Archaeological Museum has these nifty Viking artifacts, fortuitously preserved since 800 CE even though they are made of wood. I saw a really massive wooden shoe, and the skeleton of a VERY tall warrior with his longsword. Dubliners seem a bit ambivalent about the Vikings, and no wonder. The heathen Scandinavians terrorized the scholarly Celtic monks who created the Book of Kells and, as Thomas Cahill put it, “saved civilization.” But to their credit, the Vikings founded Dublin… and introduced BEER.

While we are on the subject of beer, I do NOT recommend the Guinness Storehouse, which isn’t an actual brewery tour, but a lot of noisy multimedia exhibits housed in a building that seems designed primarily to transport people by escalator to the Gravity Bar on the seventh floor. Here you can have a pint and a 360-degree view of the city, but it’s crowded and… noisy.

The General Post Office on O’Connell Street was the center of the 1916 rebellion. It’s impossible to get a good shot of the famed Cúchulainn statue because of the reflection from the window, but I was pleased with how this one turned out. Just look at that blue sky!

The city centre boasts a street called “Setanta Place” after Cúchulainn’s given name, though it’s not much to look at.

A familiar face in the GPO. Like I said, writers are everywhere in Dublin. Amen.

I felt a pang when I saw this.

I was floored to spot this van beside the Liffey. There must be some secret international brotherhood of plumbers who use the winking “Mr. Rooter” as their logo.

“Sea horses” adorn a bridge over the fabled Liffey river. The sun stayed with us for the remainder of our visit!

This photograph drew more comments on my FB album than anything else from Dublin. It’s my breakfast in the Westbury Hotel, and I must say that I miss that breakfast now that I have returned to my usual mundane fare.

I do love a good croissant!

Another familiar face… these posters were all over the city. The play we went to see, Our Few And Evil Days by Mark O’Rowe, was part of the Dublin Theatre Festival.

Seeing Himself with Sinéad Cusack onstage at the historic Abbey Theatre: Priceless.

The gardens beside the indispensable Chester Beatty Library and Dublin Castle are beautiful to behold on a sunny day. In one of the byways here, there is a touching memorial statue of heroic journalist Veronica Guerin.

The Chester Beatty (not in this photo) has some of the oldest Biblical papyri in the world and a huge Islamic collection.

“Son of a pheasant plucker” comes up in a song by the Irish Rovers. Hint: it’s a spoonerism. I highly recommend L. Mulligan Grocer pub, where we had this beer with a ploughman’s lunch and a (vegetarian) scotch egg.

L. Mulligan Grocer is worth a visit.

The stretch between Dublin Castle and the river, especially Fishamble Street, has yielded many Viking artifacts. Some of the findspots are commemorated with these plaques showing what was found: spearheads, jewelry and wooden objects. 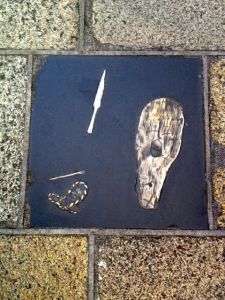 The Oscar Wilde memorial in Merrion Square park is a fittingly stylish tribute. 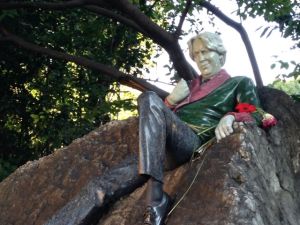 I loved this winsome nymph, who is part of Oscar’s memorial. 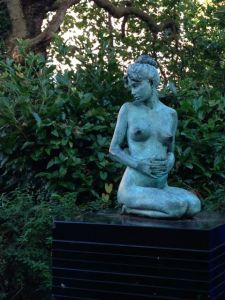 The back of the set of Our Few And Evil Days may not look very exciting, but there’s something magical about going backstage at a theatre, and seeing how the illusion is created. Nowhere is this more true than at the historic Abbey Theatre, co-founded by Yeats. I highly recommend the tour!

The little rectangular partition is where the actors change clothes between scenes.

The woodcut logo for the Abbey Theatre shows Queen Maeve with an Irish wolfhound. The archives are being digitized for future generations to study.

In all too brief a time (and just as I was recovering from jet lag), it was over. Farewell to our few and giddy days in Baile Átha Cliath, the Town of the Hurdled Ford. We’ll be back.

20 thoughts on “Our Few And Giddy Days In Dublin”