According to T. S. Eliot, the naming of cats is a difficult matter. So is naming the protagonists of one’s fiction–especially one’s romantic fiction. I can’t just pick the names of my heroes out of a hat. They have to be names that appeal to me, and with luck, to my readers. The problem is that name preferences are very personal. For example, as a little girl, I knew a boy named Jason. I didn’t like Jason and for all I know, he didn’t like me. Now, whenever I hear the name Jason, I inevitably think of that kid. (The example of the Greek hero Jason, who was something of a cad, only reinforces my low opinion.) 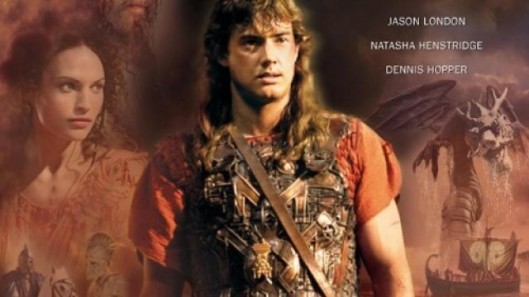 Jason London, who played the title role in “Jason and the Argonauts” (2000)

No offense to all the lovely Jasons of the world, but I will not be using your name. Likewise, the name of my nascent hero cannot be that of someone close to me, a family member or friend. That would feel completely wrong, as though I was somehow writing about that person.

What to do? I happen to have a copy of a how-to book for romantic fiction authors, pragmatically entitled How To Write a Romance And Get It Published. Although I have no plans to publish my stories in the traditional way, I sometimes dip into this book for laughs. According to the chapter on names, romance author Janet Dailey was a past master at supplying her heroes with sexy, appealing names–and she never repeated the same name twice, despite having written hundreds of books. Some examples:

Apparently, romantic heroes must have names of one or (at the most) two syllables. No fussy multisyllabic Benjamins, Theodores, or Fredericks allowed. I would never dream of using any of Dailey’s names. To me, most of them sound highly risible, like the pseudonyms Chippendale dancers might use while on the job. (Again, my apologies to any Jaces or Colters out there. You can’t help it if your mother had bad taste.) Some of these names are ones I recognize as having recently been fashionable for babies in the US. There is a mysterious process by which parents all over the country hit on a name they think is unique and interesting– and then their kid arrives in kindergarten to find ten other Codys or Ryders. Others pick the latest fashionable name in the hope that their child will “fit in.” According to Babycenter.com, the top US male names for 2014, in order of popularity, are these:

We seem to have moved away from the fake cowboy esthetic towards a world in which Liam Neeson and biblical patriarchs are the highest exemplars of masculinity. (Actually, that works for me.)

Beautiful Liam with his Big Gun.

The list also includes Mason, Logan and Jackson. Surnames used as given names are not quite as appealing to me, though the practice has a long history. Especially in the American South, people believe that it sounds aristocratic. Going to college in Georgia, I encountered any number of Porters, Hunters, and Carters. There is a certain etymological irony to this, given that surnames like Porter and Carter were originally those of menial laborers. Another interesting quirk of the South is the (now mostly faded) popularity of the names Homer and Vergil.

When I began to write, I had a small store of men’s names on which to draw,  names I had always liked. For example, James was my favorite male name, so it became the name of my first hero. I flagrantly violated the rules of How To Write A Romance, which stipulate that ordinary, garden-variety male names are to be avoided. Names such as Bob, Rick, Steve, Bill, and Paul are only used for the hero’s antagonist. They are the creeps and jerks of the romantic genre.

I remember reading another book for aspiring authors, which advised that we select names with certain connotations. In particular, the hero’s name (given or surname) ought to sound something like these:

Apparently a man whose name evokes the words “Demon” or “Devil” is supposed to be sexy. Some romance heroes are actually named Devil (thanks, Mom!) and Lucifer. Also highly favored are names beginning with the letter R:

I’m not sure what the special connotation of the “R” sound is. It is thought to be masculine and powerful. Maybe there’s some connection with the Indo-European root word for “king” which gives us Latin rex. The Greek name meaning king, Basil, is not as sexy… though I am very fond of John Cleese’s rage-driven Basil from Fawlty Towers.

Finally, an unscientific analysis of this list of hundreds of romance hero names yields the conclusion that the most popular names of all are Adam and Jake, followed by Jack and Nick. They may be clichés, but I like them much better than silly names like Falcon, Jazz or (heaven forbid) Rance.

All of which leads me to the list of names I gave my (contemporary) heroes:

What does this list say about me? The names are mostly ordinary ones, except for Theophilus and Maxentius. (In my story, when Theo is asked whether he lives under an alias, he dryly observes that Theophilus and Clarence are his real names, because “no one would pick those for himself.”) I enjoy a mellifluous, multisyllabic name now and then, especially if it has a Classical origin. One of my all-time favorite names is James Tiberius Kirk. These fancy names are like T. S. Eliot’s “particular, peculiar” cat names which are not used every day, but only for special occasions– like Munkustrap, Quaxo, and Coricopat.

There is a very Anglo orientation in this list. Not that I wouldn’t like to write about men named Enzo, Javier, Gerhard (whose name means “firm spear”), or Jean-Pierre, but I don’t feel I have the cultural knowledge to do so successfully (to say nothing of writing about men of cultures even further afield). James Whelan and Rúairí Lafferty are Irishmen, which required plenty of research on my part… Rúairí (“Rory”) bears what would be considered a “difficult” ethnic name in the US. Indeed, I had a terrible time spelling it consistently throughout my story. It means “red-haired king” and includes the famous Indo-European root.

There are cultural variations in how certain names are perceived. For example, in the US, “Nigel” and “Simon” are pebble-magnets, whereas people in the UK gladly bestow these names on their young. “Abner” is an old-fashioned, uncool name here, but it becomes sexy as “Avner,” the name of Eric Bana’s tortured Israeli Mossad agent in Munich.

With a new story, I have to get used to the name. When I first settled on the name Hugh, I wasn’t too sure about it. But as the character developed, and I pictured him in my mind, I grew very fond of his name, and began to think that no other would have fit him so well. This is a process readers experience too, if the story is well-written. I would love to read a story about a guy with an uncool or dorky name who turns out to be incredibly sexy. Anyone for Chester, Irving, or (my sentimental favorite) Durwood? Or how about a really dorky name like, say, “Benedict Cumberbatch”?