Ma Griffe (“My Signature”) can also be translated as “My Claw.” This classic fragrance features bergamot, lemon, jasmine and yang-ylang over a base of vetiver and musk, and is described as a “floral chypre,” a very green scent. Ma Griffe was the first perfume created by House Carven (1946). This is off-topic, but I can’t help observing that “House Carven” sounds like something out of a Harry Potter movie… 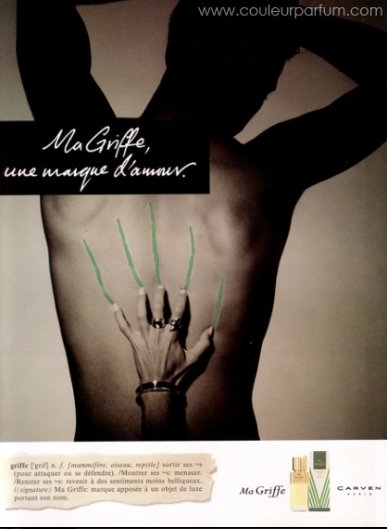 According to one reviewer, it smells like “the kind of perfume a good girl who doesn’t yet know she’s a bad girl would wear. An alternate name could be Scorpio Rising.” It is safe to say that Peter’s icy-hot friend Leslie knows very well that she’s a bad girl, and yet Ma Griffe is the perfect fragrance for her. Madame Carven, the founder of House Carven, seems to have been very fond of all things green, which is equally fitting for today’s chapter, as Leslie is about to feel the ragged claw of the green-eyed monster…

Leslie breathed a sigh of relief as the student finally left her office after a lengthy session of coaching. She resented it when they expected her to rehearse an entire lecture, just because they chose to miss class. Sometimes it was the dead grandmother excuse, sometimes their work schedules —most of the students at Parnell worked— and sometimes they got sick. Why couldn’t they ask a classmate for the notes instead of bothering her? Instead, they stood at the door, smiling their fatuous American smiles, and brightly asked, “Did I miss anything important?” Not at all, she wanted to reply. My entire lecture was trivial and banal. In fact, I wasted everyone’s time by talking about completely unimportant things. Now go away.

Thank god it was almost the end of the semester. She turned back to the journal article she was working on, but soon there was another knock at the partially closed door. “Yes, who is it?” she said impatiently.

“Yesss?” she asked, smiling now as he opened the door wider. He was holding a volume from the foyer, which housed part of the departmental library. It was a book on Van Gogh. “I’m interested in the history of les fesses, particularly the beautiful fesses of ladies.” He pointed to a painting in the book. Its caption read: Nude Woman Reclining, Seen From the Back. It depicted a woman with a very substantial rear end and a long black braid. “Could you give me a lesson?” he asked, sounding innocent as a young schoolboy. “I’m very curious to know more about these fesses.”

“Come in and shut the door before someone hears you, petit con.” She kept her voice affectionate to take the edge off the mild insult. Really, Peter could be amazingly juvenile sometimes.

He put the book on her desk and sat down in the visitors’ chair. She waited, raising an eyebrow rather than vocalizing the question. Have you fucked her yet?

“Thanksgiving didn’t go quite the way I planned,” he began, and she expelled her breath. “I’m beginning to feel that you’re not truly applying yourself to the task,” she suggested. This was disturbing, as it might mean that he was not as eager for the proffered reward as she had assumed.

“No, we were in the basement, alone, where my old room used to be, and everything was good. Better than good. Then she suddenly began to cry, and asked me not to make her do it.”

“Yes. She said she desired me, but begged me not to seduce her.” He shrugged.

“So, you had her in your power, shedding passionate tears for desire of you, and you let her go. You did nothing,” she said coldly.

“I took pity on her. If I’m going to make love to her, I want her to be happy about it.”

Leslie’s eyes narrowed as she scrutinized Peter. She could hardly believe it, but the more she thought about it, the more she realized the intolerable truth. “I know why you’re going soft, Peter. It’s because you’re starting to fall for this Gooden. Perhaps you’re already deeply in love with her.”

He looked stricken, and then quickly recovered himself, shaking his head. “Not at all. Nothing of the sort.” His denial was unconvincing. Peter didn’t know his own heart, but she could tell. She had never seen the symptoms in him before, and after all these years, she believed he was proof against that weakness, as she was. Until now.

“I withdraw the agreement,” she snapped, feeling icy anger at his betrayal. “Get out. I want nothing more to do with you until you extricate yourself from this nonsense.” Peter would be back. He always came back.

He stood up, trying to look confident, but failing. “You’re wrong.”

She pointedly ignored his words and turned back to her computer screen, refusing to look at him. After a moment, he opened the door and left.

Notes: My apologies for the short chapter today. The ones with Leslie always seem to be very clipped and curt. Perhaps it’s a reflection of her personality. But as I’ve said before, I have a certain empathy for Leslie. I endowed her a little of my own bitchy crankiness at students who innocently wonder whether they missed anything important. After a time, one notices that by preference they fake the deaths of female relatives to get extra time on a paper. Never an uncle or grandfather, always an aunt or grandmother. Why is that?

Peter told Leslie, “If I’m going to make love to her, I want her to be happy about it.” Before posting today’s chapter, I spent some time pondering whether Peter’s behavior might have been different with anyone other than Cynthia. I concluded that tears alone would not have prevented a conquest. Peter’s had plenty of experience with married women who wanted him in the worst way, yet shed a few guilty tears on the verge of crossing the line. He’s used to kissing those tears away. No, the chivalrous impulse was a first for him. There’s something about Cynthia that disarms him, yet he’s certain that Leslie’s diagnosis is nonsense…