Actually, I figured this out quite a long time ago. But every now and then, there are reminders. Some are infuriating, some are pleasurable, and still others are highly amusing:

1. I do not “season” my jeans by leaving them unwashed for six months. Apparently, people who are really into Levi’s jeans refrain from washing them. In May, the CEO of Levi’s announced during a conference that the jeans he was wearing had not been washed for a year. This practice apparently lets the jeans mold to one’s (ahem) personal shape and allows the indigo to look weathered more quickly. What to do about the stink? Some put the jeans in the freezer overnight. Others spray them with Febreze. I have read numerous articles about this strange phenomenon, and interestingly (or should I say “interestinkly”?) enough, all the individuals failing to wash their jeans seem to be male. 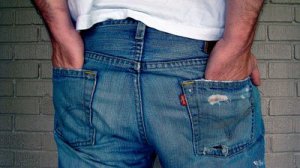 Is this sweet little arse a danger to itself and others?

2. I do not saber my sparkling wine. Until a few days ago I was blissfully ignorant of the concept of “sabering.” Then one of my favorite (male) bloggers demonstrated the technique. This involves lightly but firmly stroking the neck of your champagne bottle with a metal object so that it comes into contact with the ridge at the tip of the bottle. If you do this long enough and firmly enough, the end of the bottle shoots off, cork and all. Do I need to spell it out any further???

According to Wikipedia, “sabrage” came into fashion among Napoleon’s cavalry, who had very impressive swords and liked to use them. At first I thought the point of this was to attract the ladies, but then I began to think that it’s a guy thing. After all, a good deal of the precious elixir is wasted, and get this: it is advised to allow a small flow in order to wash away loose shards of glass, and the first glass poured should also be checked for small glass shards. Yummy! Apparently there are women who do this, but… why? 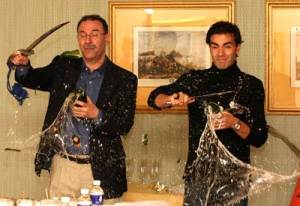 Steady on lads! The Ritz Carlton in Tyson’s Corner, Virginia offers classes in manliness that include sabering. Click for source.

3. I do not have a big deck. Another favorite (male) blogger of mine recently complained about “the curse of having a large deck.” (He shall remain nameless in order to spare any sense of embarrassment over his extremely manly state.) I slyly commented that in spite of the onerous chores he endures for the sake of his huge deck, there was at least the consolation that his neighbors were gazing with envy upon its massive size. He said, no, actually it is hidden away, so the neighbors can’t see it. A shame.

Other commenters immediately called for pictures, which he has promised to provide next week…

Now, I’m really quite untutored when it comes to the manly art of caring for and maintaining one’s deck, but I highly recommend Bob Vila’s website. In a jiffy you can learn all about safe decks, floating decks (!), decorating decks with “column wraps,” and the sad problem of moldy decks. I could not agree with him more that there’s nothing as attractive as Natural Hard Wood. He’s even got some great tips on enlargement. Did you know that you can join two decks together to get an even bigger one? Cheers!