“I prefer my kale with a knife and fork,” says the revered Irish actor. “I adore kale, but I don’t want to drink kale. I just don’t. It’s not right.” Diplomatically, he adds, “But for some people… it does the job.”

Ciarán Hinds and Stephen Holt discuss their kale preferences. Screencap by Linnet from the Stephen Holt blog. Click for source.

While in New York over the holidays, the Long-Suffering Husband and I made it a point to visit the restaurant that prompted Hinds’ discussion of cruciferous vegetables with New York arts critic Stephen Holt. The Green Symphony is a tiny spot in the theater district that serves Asian-inspired health food like the Dalai Lama Bowl ($8.50): 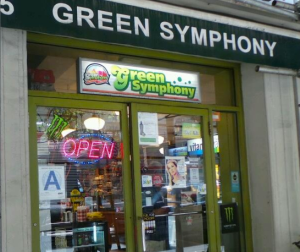 The entrance to kale Valhalla.

According to Mr. H., Ben Walker “was never out of the Green Symphony” during the run of Cat On a Hot Tin Roof, which made me wonder whether he’s a vegetarian. Or maybe he just needed to stay in shape for his (highly memorable) nude and shirtless scenes in the play… 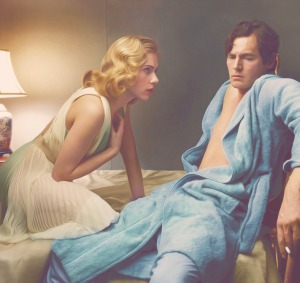 I had the Tofu Mania Bowl, which was a similar combo of salad, plain tofu and a hard-boiled egg. The food was tasty and very fresh, but under-seasoned (a perennial problem with “health food”). What really caught my attention was the special green smoothies, most of which use kale. For example, the Hawaiian Dream Smoothie ($5.75) includes kale, spinach, banana, coconut and orange. We tried Stephen Holt’s Special Smoothie ($5.75), which is kale, green apple, ginger and spirulina. Delicious!

At some point when I wasn’t looking, kale achieved the celebrity cachet that used to be awarded to foods like caviar and foie gras. Jennifer Aniston, Gwyneth Paltrow, Sarah Michelle Gellar, and chefs like Jamie Oliver have all promoted kale, causing sales to soar. Cooking blogs exploded with recipes for kale chips, and debate raged over whether to cook them “California style” at high heat, or longer at low heat. The Green Symphony sells containers of kale chips coated with designer flavors like Bombay Ranch and Spicy Miso.

Mr. Hinds, how about eating kale with your fingers? I promise this is the tastiest, most healthful vegetable you’ll ever eat. I could easily eat an entire bunch of kale cooked this way in one sitting. And wish for more. 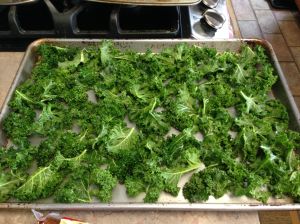 The secret is to get the kale as dry as possible before baking. Drizzle very lightly with olive oil and use your hands to make sure each leaf has a thin coating.

Bake at 350F for ten minutes, then rotate the pan and bake another 8-10 minutes.

Sprinkle with good salt, or nutritional yeast. Light as a feather, and crispy as your favorite potato chip. What could be better?

6 thoughts on “Symphony In Green”