Our New Year’s Eve dinner was the holiday prix fixe at HanGawi, which is the kind of place one only finds in New York, or a similarly cosmopolitan city. The cuisine is vegan Korean, and the restaurant is named for Korea’s most important holiday (“Big Autumn”), a time when families come together to give thanks for the harvest.

I love this kind of thing. And I love a good prix fixe menu, where you surrender yourself wholly to the chef, and each course is a like a gift waiting to be opened. I was pondering the definition of “foodie” recently, and whether there can be such a thing as a vegetarian foodie. Obviously a great many foodie pleasures are literally off the table for me (foie gras being number one among many). Yet I don’t think that foodie-ism (or the Professor’s term gourmandise, which I much prefer) inheres in the specific foods one eats. To me, it has more to do with openness to new experience. That, and the belief that the preparation and consumption of food (to say nothing of drink) are spiritual activities that sustain both body and soul.

Last year we had the New Year’s menu at Kajitsu, which serves elaborate yet austere Japanese Buddhist temple food.

A stunningly composed dish with many flavors, colors and textures, served at Kajitsu in January 2013. Photo by Linnet.

The comparison with HanGawi was interesting. Both place an emphasis on a serene dining space, simple but beautifully-crafted utensils, labor-intensive food preparation, and a touch of ceremony. But the flavors are quite distinct.

HanGawi does not emulate a specific temple cuisine, like the Zen kaiseki meals that are the focus at Kajitsu, but a more generalized concept of healthful vegetarian food including a balance of yang and um foods. (Frankly, I’m more into the yum foods, but have no objection to a well-balanced meal…)

When you arrive, you are asked to remove your shoes, which no doubt comes as a surprise to some. The servers stow them away in special cubbyholes, and show you to a table that appears to be only a few inches off the ground. Fortunately, the floor is recessed, so you can sit comfortably (a concession to Western habits?).

Our menu began with Steamboat Soup, a whimsical dish served in a heated bowl shaped like a miniature angel food cake pan. This is a relative of the ancient “hot pot” of broth in which foods were cooked at the table. As the soup arrived, flames shot up from the smokestack in the center. The delicate broth with greens and mushrooms contained two sticks skewering an assortment of interesting “treasures” that were entirely unfamiliar but tasty–a bright red fruit, a large bean, a mushroom, and some tofu. 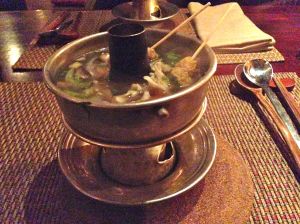 Next up on the menu was a refreshing salad containing todok, ginseng, gobo, and greens in a pineapple-miso dressing. Todok is a fibrous root vegetable found in the mountains of Korea, and much prized in Korean winter menus. Korean ginseng, another root, is a yang food that confers masculine heat, welcome in the winter. Gobo is also a vegetable little seen in Western cooking: the root of the burdock plant, which can be julienned or shredded like a carrot. The salad demonstrates the seasonality of this cuisine, and the root veggies provide plenty of yang (with the opposing feminine principle of um also present in the greens). It was garnished with bits of crispy, puffy rice.

By this point we had received our sake samplers, which consisted of Ryo (dry, refreshing), Tomoju (sweet, fruity) and Bichuwajo (somewhat sweet with herbal notes). The restaurant serves Western-style wines, but I have never found grape wines to be a good match for Asian food (with the possible exception of Champagne). Much better to enjoy sake or beer. I have enough of a wine-trained palate, however, to prefer the dry sake.

The next course was spectacular: a platter containing a persimmon stuffed with a squash-type mixture (pumpkin?), todok fritters in green dill sauce, mushrooms in spicy sauce, served on sticks, and vegetable cake with zucchini roll (this was a bit like bites of deep fried zucchini bread with winter spices). The presentation reminded me of Kajitsu, where the arrangement, shapes and textures of the food are as prized as the taste. I was surprised by the delicious dill sauce, which struck me as a fusion ingredient (made with Vegenaise!).

Next were the Combination Rolls: crispy seaweed, buckwheat noodle, and kimchee, served on a traditional banana leaf, as many of the dishes were. A joyous selection of choice morsels to nibble.

By the time we made it to the entrées (and a small bottle of Ryo sake), I was beginning to feel full. I would have been happy with a miniature tasting portion of each entrée, but luckily the Long-Suffering Husband was there to assist me in the serious task at hand. (Having been reared in the midwest, he’s a card-carrying member of the Clean Plate Club.)

A specialty at HanGawi: Avocado stone bowl rice. This arrives in a superheated, heavy bowl that keeps crisping the rice as you eat.

Sizzling tofu with asparagus, also served on a hot stone plate. This came with a dish of multigrain rice.

The deep, hearty flavors of these dishes contrasted strongly with the taste of the food at Kajitsu, which is more restrained and nuanced. Likewise, the presentation at HanGawi is pleasingly aesthetic, but one does not feel, as at Kajitsu, that the food is too beautiful to eat.

The dessert was the only low point (standard vegan fare) and I would have been happier with some green tea and a candy or two. Still, there was a very pleasing ball of vanilla ice cream (of soy origin?) with chocolate chips… 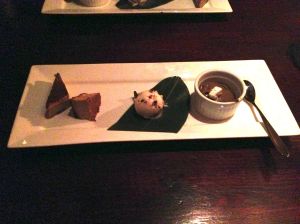 Tofu cheesecake, ice cream, and chocolate mousse with vegetarian marshmallow. If you visit HanGawi, skip the dessert and have that extra appetizer!

The menu at HanGawi is extensive. I’d like to return another time and explore its delights.

10 thoughts on “Balancing Our Um and Yang”