I have always loved funk. But the other day, I asked myself: what exactly is it? Oh the joys of Wikipedia. Immediately I discovered that African-American jazz musicians originally applied the term to music with a slow, mellow groove. Then it evolved to a rather hard-driving, insistent rhythm, implying a more carnal quality.

Yes. Funky music is sexy. We all know that. But what I didn’t realize is that “funk” as in an… ehhm… earthy odor is the referent here. So funk is the musical equivalent of a wine with gym-shoe aromas, a stinky Époisses, or a the Long-Suffering Husband after a strenuous workout in a nylon shirt. But funk music is a more easily acquired taste than these.

In early jam sessions, musicians would encourage one another to “get down” by saying, “Now, put some stank on it!”. As late as the 1950s and early 1960s, when “funk” and “funky” were used increasingly in the context of jazz music, the terms still were considered indelicate and inappropriate for use in polite company.

I am fond of James Brown, George Clinton, and the various forms of disco-funk, but the funk songs that I like the best are the ones with a strong jazz influence, and a horn section (heh, heh). As it happens, this is sometimes funk played by White Guys. In fact, one of the best funk songs of all time is by the Average White Band, a group originally from Dundee, Scotland (which in its various iterations has included Black Guys). And I must say, looking at the photos from their glory days, that they were collectively a delicious-looking herd of manly Menschen. But I have a weakness for Seventies Men. 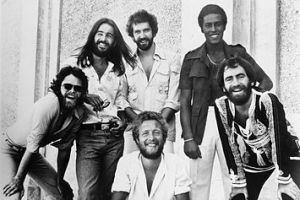 Luckily I don’t have to choose among such immortal hits as James Brown’s Sex Machine, Rick James’ Superfreak, Parliament’s Flashlight, and AWB’s “Pick Up The Pieces.” But “Pick Up The Pieces” is the song I’ve got on my exercise playlist. It’s an indispensable entry in my musical pantheon.

Check out sexy Hamish Stuart in his full kilted glory in this Youtube video (Celtic funkiness–I love it!):

And take a trip back to 1977 with this version live at the Montreux. Hamish sings, and an extremely hot Roger Ball plays tenor sax: