I sat within a valley green
I sat me with my true love
My sad heart strove to choose between
The old love and the new love
The old for her, the new that made
Me think on Ireland dearly
While soft the wind blew down the glen
And shook the golden barley.

(-“The Wind That Shakes the Barley,” by Robert Dwyer Joyce)

Directed by Ken Loach, this is a story of two brothers who live in County Cork on the southern end of Ireland. It is 1920, and Damien O’Donovan is a young doctor, about to leave for London to begin his career. In spite of his community’s harsh treatment by British soldiers, he refuses to join the IRA, as his brother Teddy already has. But a violent episode at the train station changes his mind, as well as the course of his life.

The first hour of the film did not enthrall me. It felt (perhaps by design) like a directionless cycle of violence where first one side and then the other carried out bloody attacks. The British soldiers in this film are portrayed as sadistic brutes who hate and fear the people they’ve been sent to suppress. (It should be noted that the film drew harsh criticism from political conservatives in England, although it won the Palme d’Or at Cannes). Finally Damien’s cohort is jailed on information given by Chris, a young IRA member who crumbles under interrogation. Teddy is tortured, his fingernails ripped out with rusty pliers by the British captain (arggh). All the prisoners are told they will be summarily executed the next morning, but fate intervenes and some escape.

Immediately they turn to reprisals, and it is Damien’s heartbreaking job to execute the young “traitor” Chris, a local boy who is well known to him. This is where I finally felt that the movie was saying something to me, about the soul-deadening effect of violent partisan conflict and the way it tears the fabric of families and communities. The theme is intensified in the second hour, when the Irish Revolution leads to a compromise treaty negotiated by Michael Collins, but the situation devolves into civil war. On the one side is the “Irish Free State,” the new government of Ireland. On the other side are the anti-treaty Irish, who feel betrayed by Collins and vow to continue the fight. The two positions are crystallized in the persons of Damien and Teddy, loving brothers who now find themselves fighting each other.

I liked the way that Loach gives us “history on the ground.” We never see Michael Collins or the leaders in Dublin and London. Instead, we see how the larger historical events play out in this small community in Cork, where neighbors are now turning their guns against each other. Damien has socialist leanings, like his older friend Dan (the wonderful Liam Cunningham, who also plays Davos Seaworth in Game of Thrones). As a doctor, he’s seen children starving to death, and he’s convinced that the treaty only signals more economic injustice for the Irish (it is fairly clear that Loach’s sympathies lie with Damien).

Teddy, on the other hand, believes that the Free State is the next step toward independence (as in fact proved to be the case), and that the rebels must not be allowed to ruin the progress made so far. In the end, there’s a terrible reckoning, which ironically and horrifically takes place in the same jail where the two brothers had been imprisoned after being captured by the British. The acting is very accomplished, and this movie changed my attitude toward Cork native Cillian Murphy, who plays Damien (previously I had only seen him in Inception and The Dark Knight). Both direction and cinematography are excellent. The violence plays out against the rocky, grass-tufted landscapes of Cork, which seem both lush and stark at the same time. You never forget that this is Ireland.

Loach is noted for “realism,” and this comes out especially in the dialogue. Sometimes the actors muss their lines, and he lets that stand. It gives you a feeling that you are eavesdropping on a real conversation. Beneath the gritty details, the movie has a structure and symmetry that is almost Classical. As the film begins, we see the farmstead of Sinéad, a young woman of Cork, as British soldiers harass her family and murder her brother. Next, Damien becomes her sweetheart, and must helplessly watch as Sinéad is brutalized by British soldiers. Still later, the “Free State” soldiers intrude, harassing the family with rifles just as their British predecessors did. The film ends, very movingly, in a fourth heartbreaking scene at the same farmhouse. I’m glad I saw this poignant, defiantly “non-Hollywood” treatment of the Irish Civil War before watching Michael Collins. My review of that film is coming soon. 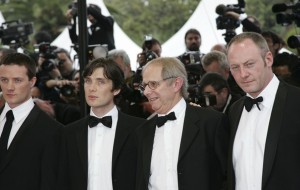