According to Hugh Laurie, reading P.G. Wodehouse novels saved his life. Now, that’s my kind of Man. I’ve always thought that the writing of great comedy is under-appreciated in favor of so-called “serious literary fiction.” And I have a stash of every Jeeves and Wooster novel, ready to hand for those days when the dog bites and the bee stings…

I recall laughing to the point of tears at A Bit of Fry and Laurie when it aired in the early 90’s, especially the running sketch where Stephen Fry mixed a weirdly named cocktail (e.g. “Swinging Ballsacks”) and asked the magic question: Please Mr. Music, Will You Play? Whereupon Laurie attacked the piano with gusto.

Later of course there was the magnificent Jeeves and Wooster, with Fry as the omniscient, soft-footed Jeeves. Laurie was so credible as the gormless, feckless, joyful twit Bertie Wooster that I experienced cognitive dissonance when he played an omniscient and grumpy Doctor House, the Sherlock Holmes of exotic infectious disease. And became an unlikely sex symbol. 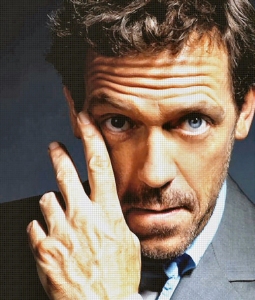 The hand tells the story. Not to mention those baby blues.

Hugh Laurie is one of those men who oscillates amusingly between sexiness and goofiness. I saw him the other night live with The Copper Bottom Band, and at times he was reminiscent of John Cleese, performing Silly Walks on his long, stork-like legs (he is a lanky six-foot-two). Other times? Well, let’s just say he hit me with his rhythm stick. 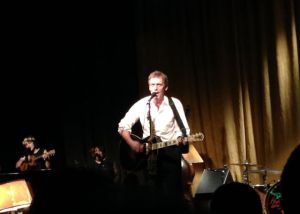 Hugh Laurie, looking quite sexy, thank you very much. Photo by Linnet.

Laurie’s first love is music, a fact that is obvious enough when you see how much he enjoys performing with the top-drawer musicians who make up the Copper Bottom Band (including two incredible female vocalists and one knock-your-socks-off female trombone player). He’s very self-deprecating, and highly aware that audiences think of him as an actor first, not a musician. But he holds his own quite comfortably as a pianist.

And the voice? I must admit that the first time I heard him sing, I thought he was doing a comic voice. It is distinctive, and yet that is one of the hallmarks of a good jazz voice. I am reminded of the truism: it’s not what you have so much as how you use it. Oh yes. On that score, he’s a winner.

The choice of songs is pure Laurie and one of the reasons I am so fond of him. The show began with the Mardi Gras classic “Iko Iko,” and ended with an encore of the inspired and silly scat-fest “I Want To Be Like You” from The Jungle Book (a personal favorite of mine). In between there were plenty of old-time blues and jazz masterpieces (“Why Don’t You Do Right/The Weed Smoker’s Dream,” “I Hate A Man Like You,” “Wild Honey,” “Junco Partner”) and the equally pleasing tango “Kiss of Fire” as well as Hoagy Carmichael’s “Up a Lazy River,” sung by the male members of the band with Laurie on guitar. Pure pleasure.

Beautiful Man, may you never be far from a piano.

2 thoughts on “Hugh Laurie and the Copper Bottom Band”