When I saw a photo of the inside of the Royal Albert Hall, I thought right away that it looked like the Colosseum.

A screenshot of the packed Hall. This was an event called “Ultimate Irish Music.” 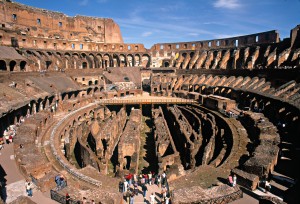 According to Wikipedia, designers Fowke and Scott were “heavily influenced by ancient amphitheaters.” Royal Albert Hall: exterior. It looks like a cross between the Pantheon and the Colosseum!

The Colosseum in its evening dress of lights.