Dr. Dog in 2011. One band member seems to wearing a Christmas sweater (ironically I presume). Photo by Cris Crisman. 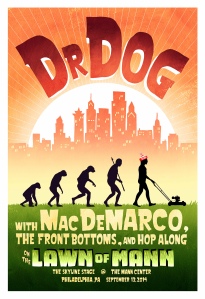 I love Dr. Dog’s posters. They’re all really cool, like this one.

How can you tell if a girl wants you? The key to successful seduction is recognizing and responding to a girl’s subtle signals. Does she lean in? Does she touch you in any way, even in a way that seems accidental? Does she offer to buy you a drink? I remember a girl who did all these things, and instead of responding to her pleas, I ignored them. We could have shared a beautiful evening together, but I let her down. Don’t make that mistake. Most girls are afraid you’ll think they’re cheap if they make their interest too clear. So keep your eyes open, and when you see the signs, take action immediately. —Inclusus Amator

It was another hectic Monday afternoon in the food court, and Amber was frowning over her Subway veggie sandwich. Today’s discussion of Catullus 16 had not gone well, from her perspective. The poem featured a hyper-macho Catullus threatening to orally and anally brutalize a couple of friends who had teased him for writing sensitive love poetry to his girl. It was exactly the kind of thing Dr. Kavanagh called “the performance of masculinity.” Once again, Dr. Griffith had asked for volunteers to translate the poem, and then looked right through her, ignoring her raised hand.

“Have you two noticed that Griffith is acting weird in the poetry class?” she asked cautiously. She didn’t want to lead the witnesses.

“Yeah. He does it whenever we get to the dirty parts. Dr. Jamieson told me that they gave him this class at the last minute, because of some staffing thing. It’s not even his syllabus,” said Joan.

“He’s avoiding calling on us,” declared Amber flatly. “He only called on the guys today.” She gestured toward a nearby table where a group of men from their class were devouring Big Macs and large orders of fries. Nick Flynn was there, laughing with Del Parker. Neither belonged to Amber’s social set, and she rarely saw them outside of class. She wouldn’t mind hooking up with Del sometime. He was that rara avis, a black Classics major, and ravishingly good-looking, with skin the color of a mocha latté, shoulder length dreads, and golden-brown eyes. Nick was less handsome but more intense, with pale skin, a shock of straight black hair falling over his forehead, and greenish eyes. Past their table, she noticed Dwayne Hammond standing at a loss with his McDonald’s bag, looking for a place to sit.

“Hey, Duh-wayne! Come over here a sec,” yelled Gaby, waving at him. “We want to ask you something.” He obligingly made his way over and stood attentively before them. He’s not bad looking, thought Amber. Though his odd western gear made him seem as exotic as one of the female Middle Eastern students in their caftans and hijabs, he was tall, and the close fit of his jeans and shirt revealed a shapely torso and muscular thighs. His brown leather belt was secured by a large, ornate buckle with a long-barreled pistol on it.

“Do you think Griffith’s calling on men instead of women, when we read the dirty bits? Like the lines in Catullus about face-fucking?” If Gaby was hoping to embarrass him, it didn’t work. His brows drew together slightly, beneath the brim of his cowboy hat, and he lifted his lunch bag, saying, “Mind if I join you ladies?” Before they could reply, he set down his backpack, removed his hat, then took the seat next to Gaby, drawing a double Quarter Pounder with cheese from his bag. “Now, as to your question,” he said, “ah do believe you’re raht.”

“That’s it?” said Joan after a moment. “Don’t you have any further comment?” He bit into his burger and they waited for him to swallow. “Well, it don’t look good,” he finally said, “but ah’m not sure ah want to pass judgement, not bein’ in possession of all the facts.”

“Don’t want to cast the first stone, eh?” said Gaby, sounding irritated. “Why’s there a gun on your belt buckle, Duh-wayne? Haven’t you heard about all those kids being killed at their school by some nut with a gun?”

“Sure ah have. But it wasn’t no Colt revolver he was usin’.”

“I suppose you’ve got a long-barreled gun, haven’t you?” she snapped, and then laughed provocatively. “Or you want us to think you do.” Gaby always insisted that the real purpose of guns was to make men feel manly.

Dwayne was busy eating, and he didn’t react at first. At last he put down the remains of his burger and replied, “Gabrielle, ah do own two handguns and a shotgun for huntin’. And ah used an assault rifle, an M16, durin’ my tour in Afghanistan. Nobody needs a high-capacity clip lahk that except in war. These folks who say they do are just too lazy to change cartridges.”

“You went to Afghanistan, Dwayne?” said Amber. “That must have been terrible. How long were you there?”

Dwayne cast her a grateful look. “Eighteen months. Ah stahted in college at Baylor, but then ah got deployed. When ah got outta the army, ah came here to help out mah sistah. Her husband was killed in action, and she’s got kids.”

“Speaking of killing, did you off any civilians while you were there?” said Gaby rudely. Even as a high-school senior, she had spent many an hour in the student center plaza with campus anti-war groups, protesting Obama’s decision to prolong the war in Afghanistan.

“Gaby! That none of our business!” interjected Amber. “Don’t answer that, Dwayne.” In truth, she was afraid that if he admitted to having killed anyone, for any reason, Gaby would rant ceaselessly about it. “The two of you are never going to see eye to eye on anything.”

“Oh, ah don’t know,” said Dwayne consideringly. “Mah church believes in ministerin’ to the poor, the sick, and prisoners, just lahk she does. And then there’s the question of Israel. Gabrielle and ah just maht agree on that.” He locked eyes with Gaby, and Amber perceived the mental turmoil this caused in her friend. Gaby was far to the left politically, except when it came to Israel. Though she wasn’t a particularly observant Jew, a number of great-aunts and uncles had disappeared in the Holocaust, and many relatives resided in The Land, as she called it. Gaby glared back sullenly at Dwayne, but for once she was speechless.

It was time to change the subject. Amber widened her eyes and looked imploringly at Joan, who up to this point had been following the give-and-take between Dwayne and Gaby with a gleeful expression.

Joan got the message. “Umm, Gaby, are you going to see Dr. Dog next Friday? I know they’re your favorite.” Dr. Dog was an indie folk-rock band, and a Philadelphia institution.

“My car’s still out of commish,” replied Gaby, shaking her head glumly. “The hand controls are on the fritz and my mechanic has no idea how to fix them. I’ll have to take it to the dealer.” As a paraplegic, Gaby used gas and brake controls installed in the dashboard. In order to drive, she first had to transfer herself from her wheelchair into her Honda, then take the wheels off the chair one by one, fold the chair, and lift it into the car. When she reached her destination, the arduous process was reversed.

“Oh. Sorry.” Joan looked as though she regretted the question. “I’d take you but I promised to go to Tommy’s frat party that night.” Amber herself didn’t own a car; much to her mother’s disapproval, she got around town on an old Vespa 300cc scooter, which could do short stints on the interstate.

“Ah’ve got nuthin’ that night,” Dwayne suddenly said. “And ah’ve heard of Dr. Dog. Ah could take you, Gabrielle, if you don’t mind a little manhandlin’. Mah truck rahds pretty high, but ah could lift you in, and throw the chair in the back.”

This was a tactical error. Gaby might welcome the “manhandling” of her person, if the handler in question had amorous intent and was suitably attractive. Her chair, on the other hand, was an extension of her body. A suggestion that it be “thrown” anywhere was almost physically painful to her. Now Gaby actually bared her teeth at Dwayne, pleased to have found a fresh reason to be angry with him. “Save your pity for someone else, Christian Boy.”

Amber intervened. “Come on, Gaby. I want to see them too, and you know I can’t go without you.” As Gaby frowned, clearly tempted but unwilling to admit it, Amber turned back to Dwayne. “You never, ever throw Gaby’s chair. Got it?”

Notes: In grad school I knew a young Jewish woman who was both sexually attracted to and highly contemptuous of a fellow student who happened to be a devout Baptist. She used to call him “Christian Boy” (the most dire of insults), and she inspired the character of Gaby.

The seduction advice dispensed by Inclusus Amator in each of the “Amber” chapters is drawn (for the most part) from real seduction websites like Girlschase.com. Every young woman should read these sites in order to understand a certain male perspective, which sees women as prey to be bagged. The more sophisticated of these men use very effective psychological techniques to persuade the innocent and unwary. When I first did the research for this book, I recognized some of this repertoire from my college days. Girlschase is the least reprehensible of such sites because the focus is positive and the idea is that both partners will enjoy pleasure. It also gives the best advice, though once in a while, it’s hilariously off-base.