This film about a French war criminal has an unexpected Irish angle, because Brian Moore (1921-1999), author of the novel The Statement, was born and raised in Belfast, and educated at St. Malachy’s. Moore’s work often involved bitter critiques of Catholicism (as well as examinations of deep faith, as in the book and film Black Robe). He also wrote extensively about the Troubles.

Michael Caine as Pierre Brossard. All screen caps by Linnet. Click to enlarge.

The Statement, however, is set in France during the early 90’s. Moore seems to have become increasingly interested in French culture toward the end of his life (his last, unfinished work was a novel about Rimbaud). The character of Pierre Brossard was inspired by the real-life Paul Touvier, a pro-Fascist collaborator with the régime of Vichy who was responsible for the murder of Jews. After living in France in hiding for years, Touvier was arrested for war crimes, and unlike Brossard, he spent the rest of his life in prison. However, it later came to light that he had been sheltered by members of the Catholic Church as well as officials in the government.

The film received mixed reviews, at best. According to the New York Times, “instead of seriously addressing the issue of the conservative Catholic complicity with Nazism… the screenplay is content to skirt any serious controversy by reducing the drama to a prolonged, largely suspense-free manhunt, in which Brossard scurries like a weary hunted animal from one monastery to the next as the net closes around him.”

This amused me, because in the middle of the film, I had turned to the Long-Suffering Husband and commented, “it is really suspenseful!” The cat-and-mouse game, with government officials and mysterious assassins pursuing an increasingly desperate Brossard, certainly held my attention. The criticism regarding the church is also misplaced, because the story illustrates rather powerfully that Brossard has been supported and hidden for years by a network of Catholic priests, who absolve him of his crimes, obstruct justice, and consider themselves above the law. To my mind, however, the central interest of the film lies less in the hypocrisy of the church than in the character study of Brossard himself.

This is an amazing, raw performance from Michael Caine, faced with the task of evoking sympathy for Brossard in the viewer, while simultaneously revealing how monstrous he is. As Caine comments in the featurette, evil people don’t see themselves as evil, and an actor must play the character from the inside. Ensconced in a community of like-minded men, Brossard persists in the belief that his actions were justified or at least forgiveable in the eyes of God, even as he is haunted by memories of the killings. He never considers giving himself up to the authorities, as he is urged to do at one point, and taking responsibility for his actions. Breaking the law in multiple ways causes him no guilt; the only law he recognizes is that of the Church.

Brossard’s faith is portrayed as passionate and devout, yet shallow and mechanistic. He believes that confession and absolution from one of his priestly friends has the power to release him from responsibility for anything, up to and including the taking of human life. (The priests in turn are portrayed as absolving him with no requirement for penance or restitution of the wrongs he has done.) Brossard is very obsequious toward his protectors, accepting that they have spiritual and temporal authority over him. He lacks the ability to question any of his assumptions or reflect on himself and his life, which has been reduced to a feverish, meaningless struggle to survive at any cost. Although critics suggested that the film stepped back from controversy, they missed the biting critique of religion that is present in the characterization of Brossard. I suspect that this element of the screenplay comes from Brian Moore, who was disgusted by what he considered a similar mindset in Irish Catholicism. 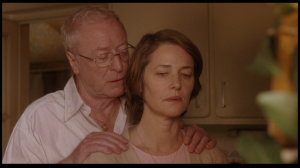 He’s still got it, baby!

Among the best scenes are those between Caine and the great Charlotte Rampling as his estranged wife. Here we have a chance to see the arrogant side of Brossard. The same man who shows extreme humility before a priest or a statue of Mary now assumes an attitude of cool superiority over his wife. We can easily imagine that in his younger days, he thought nothing of physically intimidating her, but in his weakened state as an elderly man in poor health, he must resort to emotional manipulation. How chilling to watch as he reminds her of how much she once desired him (yes, the 70-ish Caine still had plenty of sexual magnetism) and, when that approach fails, promises that he will take from her the one thing she loves most, if she does not comply with his wishes. For her part, Rampling ably conveys the complex feelings of this woman who hates and fears her husband, yet is capable of compassion toward him. 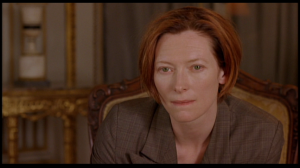 Tilda Swinton, the most chic of female shrikes. Try to say that three times fast.

Jeremy Northam as the tasty Col. Roux. (roux, n.: a heated mixture of flour and butter that gives a velvety texture to sauces)

Director Norman Jewison assembled a stunning cast for this film. It’s a pleasure to watch the subtle flirtation between Tilda Swinton’s hard-driving, uncompromising Judge Livi and Jeremy Northam’s measured, level-headed Colonel Roux. One reviewer on IMDB described Tilda Swinton’s character as a “female shrike,” which is not too far off the mark, given her desire to impale Brossard. There is a delicious gender reversal in the way she takes the lead in the investigation. Her strong personality doesn’t threaten Col. Roux, which makes him all the more attractive. Also pleasing is the fact that he has a gratuitous shirtless scene getting out of the shower, while she is always shown impeccably dressed in tight, sexy shirts and skirt suits with heels. Moreover, her asymmetrical red hair is mesmerizing, a character in itself. I would have appreciated a slight ramping up of the sexual tension, which is never allowed to take precedence over exposition and getting on with the chase. A deleted scene shows Livi and Roux sharing a cigarette late at night, and I think this should have been included in the film, if only for the way Northam inhales.

How could they have cut this out???

Spoiler alert. Don’t read any further if you hate spoilers.

Ciarán Hinds has another of his many “small but pivotal” roles as Pochon, the mysterious control who sends out one assassin after another to dispose of Brossard. The failure of these hit-men means that Pochon himself must take on the task. There is very little opportunity for the development of Pochon’s character, who mainly functions as a tool to advance the plot. However, Hinds plays him as an efficient, resigned type who understands that he is inextricably caught in the web of lies constructed by the Old Man, a government official who fears exposure by Brossard. When he finally contacts Brossard directly, Pochon adopts a reassuringly calm, even seductive tone that is convincing enough to fool the wary but panicked Brossard. Only a subtle glance to the side, while Brossard’s eyes are off him, reveals Pochon’s intent to deceive. As soon as they are in the alley, he coolly discharges his task, and his gun.

Ciarán Hinds as Inspector Pochon. Why do we not get to see him in a towel?

So seductively did Pochon lure Brossard into the alley, I thought they were going to get a room! 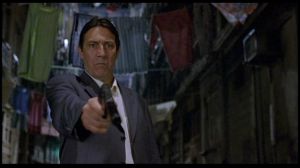 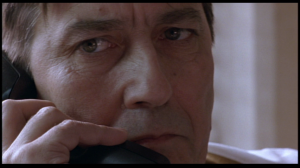 Indulge me. And if you’re a fellow Hinds  fan, see this page for more screen caps.

Tilda Swinton has a great scene with Alan Bates, who plays a rather sinister family friend in the government who tries to warn her off the case. Another pleasing addition to the cast is Colin Salmon, whose Jesuit Father Patrice is extremely charming (and who seems to be an old flame of Judge Livi from their school days). I found myself wishing they had a few more scenes together, since the chemistry between Salmon and Swinton was so good.

Alan Bates, who somehow manages to seem rather French.

The delectable Colin Salmon. Oh that we could see him in a towel. And I want his books, too.

One thing that bothered me about this film is that it does not feel particularly French, in spite of the beautiful Provençal landscapes. Most of the actors are English, and Tilda Swinton in particular speaks with a very posh, upper-crust accent that screams “British” (though she is, it must be admitted, extremely chic). Of course, it would have been even more absurd to have the actors adopt fake French accents, and I’m not certain if there is a solution to this problem, other than filming in French with French actors. As if to emphasize the French setting, Jewison does show the characters enjoying their meals, and the camera lingers lovingly over their exquisite food. At lunch with Judge Livi, Col. Roux insists on performing the delicate operation of cutting and serving a fish for two, rather than letting the waiter do it. A tiered tray of macarons and other delectable sweets appears with coffee at the end of the meal (after which Livi leaves Roux to pick up the obviously hefty check). One of Brossard’s assassins is forced to rely on room service at the instructions of Pochon, yet still manages to do justice to his meal, and an amusing police detective/gourmand investigating the death of one of Brossard’s would-be assassins complains about the way Americans eat on the run. 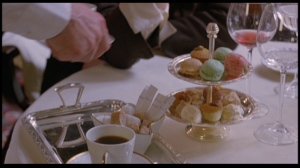 One of my favorite scenes, natch.